Landscape with stream and hill town 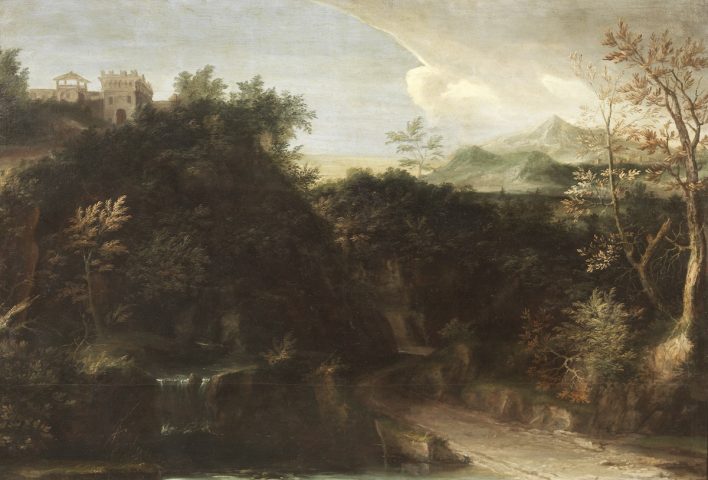 17th CENTURY PAINTER FROM THE MARCHES

Landscape with stream and hill town

This rather large landscape includes elements that are not uncommon in landscape paintings of the 1600s: a country lane receding into the woods, a ramshackle building on top of a hill, a stream, small hills diminishing into the background. Visually the composition is brought alive by the contrast between the areas in shade and the areas bathed in the moving sunlight that we intuit as it is filtered through the cloudy skies.

There are two principal veins of artistic styles that flourished during the 1600s: the ‘classic’ landscape style which developed along the lines of Raffaello and can be particularly noted in the Carracci paintings and thence in the works of important French painters like Nicolas Poussin, Claude Lorrain and Gaspard Dughet, or the ‘picturesque’ landscape style, born from the examples of Salvator Rosa. In contrast to the serene visions of Arcadia in the former, in our canvas the influence of strong contrasts and mystery prevail, characteristic of the great Neapolitan painter-poet.

The presence of a noble palace in the Marches leads us to assign this painting to the local ‘picturesque’ school and date it to the second half of the 17th century.