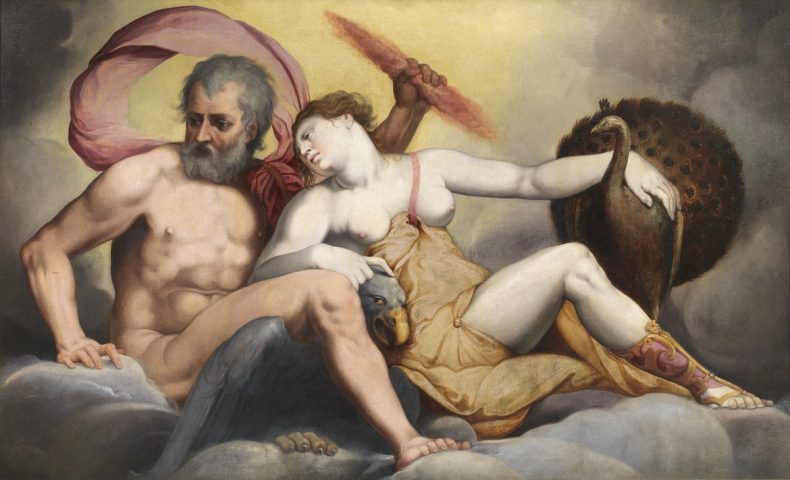 The father of gods and his wife Juno are depicted in an intimate moment, the former recognizable for the eagle on which he is sitting and the thunderbolts he is holding, the latter for the peacock next to her.

Perhaps conceived to be part of a series on the “loves of gods”, as suggested by all the characters gazing downwards on the left, out of frame, the canvas was likely intended to be placed on a high location, an appropriate choice considering both the “celestial” subject, and the size and perspectives of the characters.

The figure of the goddess, depicted while caressing the head of the venerable bird, appears to be inspired by Michelangelo’s art and, in particular, by the allegories created by the artist for the Sagrestia Nuova, in San Lorenzo, such as the Aurora. This helps place, with reasonable accuracy, the area of execution of the painting in Tuscany, where the artist indicated by Alessandro Nesi was active.

The artist, the scholar states, is originally from the coastal zone of the Granducato – Massa or Fivizzano – but he had the opportunity to visit Florence, where he enrolled at the Arte del Disegno in 1568, being therefore familiar with Buonarroti’s masterpiece.

In line with the compositional nature of Ghirlanda’s art, the figure of the god, completely naked, actually appears to be closer to the style of Raffaello: it is not uncommon to find a playful approach in his frescoes – as can be seen in the work in question with the joyful expression of the caressed eagle –, which recalls the nonchalant art of Raffaello’s followers, such as Giulio Romano or Perin del Vaga. This last painter’s work was undoubtedly known to Ghirlanda, as can be deduced when, in the nineteenth century, they found a model similar to his lost facade decorated in frescoes of Palazzo Mazzei, in Massa, “in the analogous subject created by Perin del Vaga for Palazzo Doria, in Genoa”.