Holy Family with the infant St. John and angels 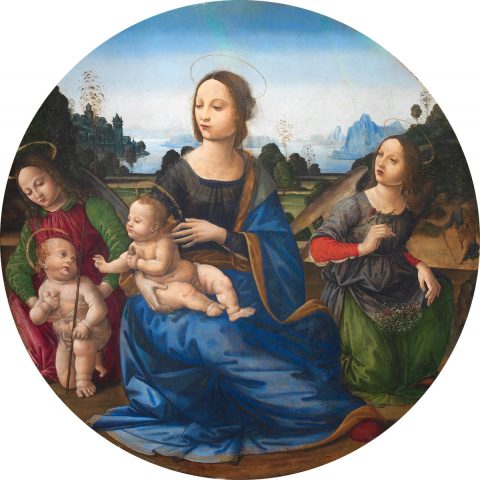 Florence, active in the first quarter of the 16th century

Holy Family with the infant St. John and angels

This large tondo on wood is the work of the mysterious “Tommaso”, an artist who belonged to the circle of Lorenzo di Credi. Morelli used this fictitious name already in 1890 to indicate the unknown author of a number of works which were recognized as being by the same hand as the tondo with the Holy Family at the Galleria Borghese in Rome, a group which has for some time been expanded to include the paintings of the so-called “Master of the Sacred Conversation of the Holy Spirit”.

The pretty composition, in which one may admire details of touching quality and extraordinary conservation – notice, for instance, the delicate complexion of the angel on the left – bears witness to figurative ideas that were introduced between the late Fifteenth century and the first decade of the following one, in that exhilarating moment in history when artists as Leonardo, Raphael and Michelangelo were working in Florence at the same time. The pyramid formed by the monumental central group of the Virgin with the Child in her lap reminds, for instance, of the Madonna of the Meadow by Sanzio dating from 1506 (Vienna, Kunsthistorishes Museum), and also the noble way in which the Mother turns backwards appears to echo ideas expressed by the painter from Urbino in that painting. Alessandro Nesi, author of a study on this tondo, correctly observes also evident Leonardesque echoes, which may be observed in the entire tondo, as in the pretty landscape in the background, where “the trees and the castle, outlined with a typically Flemish care, are alternated by the mountains further away, rendered in shades of pale blue which (…) attempt to evoke Leonardo’s characteristic sfumato”. Nesi has linked this work to a drawing found at the Nationalmuseum of Stockholm (inv. 95) of a woman’s face characterized “by analogous somatic traits and an almost identical hairstyle”.

Please note that this work has been notified with Ministerial Decree no. 80/2011 and has been declared of exceptional artistic interest. This work may not be exported from Italy.