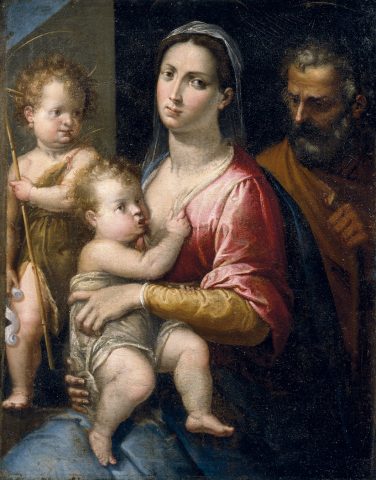 This splendid Florentine canvas from the late Sixteenth century, featuring the Madonna with the Child at her breast, Saint Joseph on one side and the infant Saint John on the other, which we have previously attributed to Bernardino Poccetti, is on the contrary certainly the work of Stefano Pieri, a contemporary Florentine artist. We would in particular like to thank Alessandro Nesi who has published this painting in a monographic contribution on the artist.

The expert has correctly pointed out that this painting echoes the lost Madonna of Porta a Pinti by Andrea del Sarto, today known thanks to a great number of copies and several preparatory drawings by the artist, “with the figures that appear, as in the prototype, against a background consisting of a stone cube faceted by a clear-cut shade, in an open-air setting as indicated by a glimpse of the sky”. The reinterpretation of the work by Andrea del Sarto presented by this painting “does not fail to demonstrate actual similarities with the manner in which Poccetti approached the painting” of the great Florentine master but, as Nesi underscores, both the physiognomies and the eminently pictorial characteristics of the work reveal unmistakeable analogies with the work of Stefano Pieri. In particular, the expert has stressed the close resemblance with the Madonna in Glory of Santa Maria Assunta a Badia in Pacciana (Pistoia) – one may, in particular, observe the face of the Virgin in the two paintings – and with the canvas featuring the same motif by the author of this painting, which appeared in the antiquity market of London.