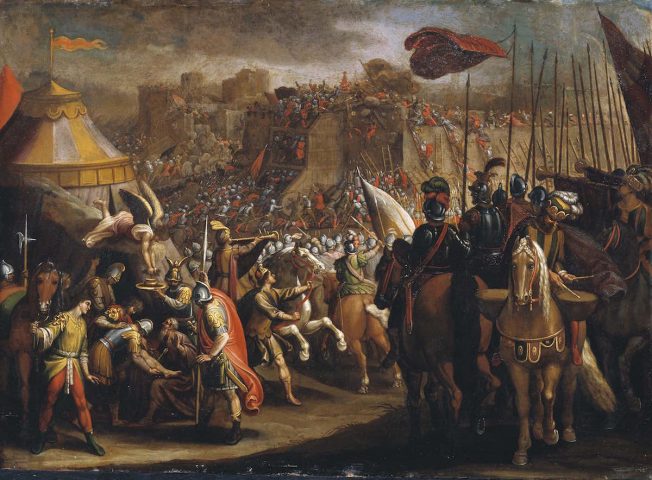 Published on the occasion of the exhibition Bellum. Battaglie nell’arte tra ‘600 e ‘700, held in Mondavio in 1994 (catalogue 2, pages 20-21), this work on copper of considerable size represents an episode in Jerusalem Delivered by Torquato Tasso. The captain of the crusaders, Godfrey of Buglione, wounded during the siege of Jerusalem (“when on his leg a sudden shaft him hit; and through that part a hole made wide and large; where his strong sinews fastened were and knit” XI, 54) is miraculously healed by a medicine brought by an angel. The faithful Erotimus, who had sought to heal the commander in vain, then exclaimed to his Lord “this hurt and wound; no human art or hand so soon makes sound; some angel good I think came down from skies; thy surgeon is, for here plain tokens are; of grace divine which to thy help applies; thy weapon take and haste again to war.” (XI, 74-75).

The curator of the exhibition, Ferdinando Arisi, has attributed the work on copper to the circle of the Florentine painter Antonio Tempesta. Artist of fundamental importance for the development of the “battle” genre in the Seventeenth century, Tempesta trained, according to sources, under Stradano and aided Vasari in the project for the decoration of Palazzo Vecchio. He was moreover author of a quite consistent number of etchings, among which the series inspired by Tasso’s work are particularly famous; they enjoyed great success and served as source of inspiration and model for copies executed by numerous artists in his circle and workshop. On the occasion of the exhibition, the researcher indicated, referring to this work, the interesting “compositive solutions, that in spite of the mannerist context vaunt original points” and the “very accomplished” figure of the palfrenier to the left. This painting corresponds closely with signed works by the master as the Battle between Christians and Turks and the Battle between infantry and cavalry found in the Gallerie Fiorentine, published by Marco Chiarini (Battaglie. Dipinti dal XVII al XIX secolo delle Gallerie fiorentine, Firenze, 1989, numbers 1-2) and more recently, in 1999, by Sestieri (I pittori di battaglie, Roma, 1999, numbers 1-2, p. 513).