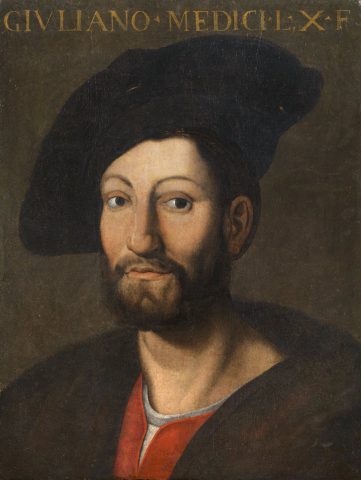 TUSCAN MAESTRO OF THE SIXTEENTH CENTURY

The figure depicted in this painting, as clarified by the inscription in capital Latin letters, is Giuliano de’ Medici (1479-1516), son of Lorenzo il Magnifico and brother of the first Pope of his House, Leone X. He was the one who, in 1512, left Giuliano in charge of Florence, which had just been reconquered by the family, after years of exile; however the promising leader, educated as a child by Poliziano and imbued in the Neo-Platonism of his father’s court, died prematurely, shortly after his honorary investiture as Duke of Nemours.

In size and dimension, the work in question is a portrait that can be compared to those of Giovian features, from the name of the famous collection of humanist Paolo Giovio, gathered in Lake Como, and later copied, at the request of Cosimo I, by Florentine painter Cristofano dell’Altissimo. These portraits, just like the one here presented, reproduced the features of important works – or they would make them up when portraying heroes of a distant past with no iconographic tradition – with the peculiarity of adding the name of the portrayed person. In this case, the painting comes from a portrait attributed to Raffaello, known for some copies given to his workshop, such as the one preserved in the Metropolitan Museum in New York (inv. 49.7.12) and the one preserved in the Florentine Galleries (inv. 1881, n. 345).