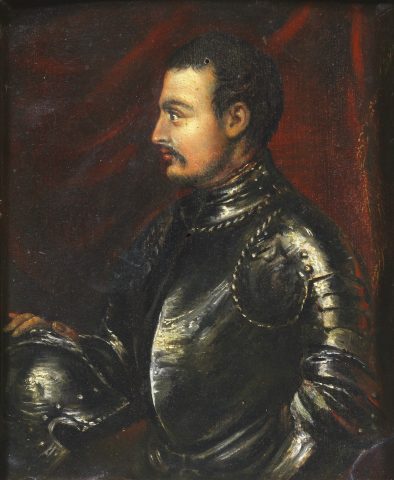 MASTER FROM THE 17th CENTURY

Among the few Medicis whose name is associated with War, rather than Art and Culture, Giovanni (1498-1526) was part of a cadet branch of the House. This particular lineage, know as “del Popolo” and descending from Lorenzo il Vecchio, would be in power from the ascension to the throne of Cosimo I, after the assassination of Alessandro, first duke of Florence, until the extinction of the dynasty in 1737, with the death of Giangastone. A celebrated man-at-arms, Giovanni was killed in battle near Mantova, in an effort to stop the descent of the Emperor Charles V, in the months prior to the Sack of Rome of 1527.

The small-sized painting here presented shows the Condottiero in armor from the side, a pose that finds its prototype in the 1545 canvas made by Venetian Gian Paolo Pace, also known as the Olmo (doc. 1528-1560), a work that we know, thanks to Vasari’s Le Vite, was given to Cosimo I by Pietro Aretino (Gallerie degli Uffizi, inv. 1890, n. 934). Our piece is characterized by a quick and immediate execution, similar to that of a sketch. Although the oil-on-paper technique here used is consistent with a preparatory use, we believe that this is more likely a practice exercise or a recollection made after Pace’s painting, probably in the Baroque period.