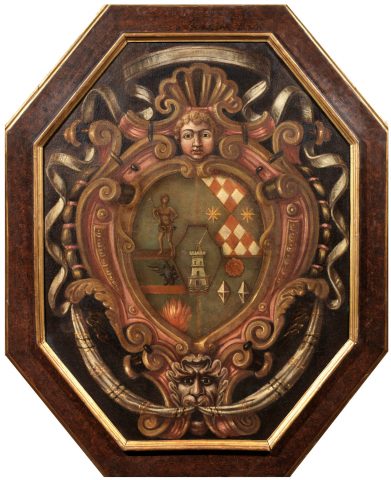 Tuscany (Pisa?), first half of the 17th century

This painted octagon, in its original frame, is an anything but common specimen of ‘provanza’ or proof of four quarters of nobility. The latter is documentation in images which, with the corroboration of testimonials and evidence confirming its authenticity, was presented by an applicant for admission to an order, either religious or military, reserved only for nobles. Sometimes, as Alberto Bruschi, author of a study on the work in question points out, they were also realized “to be donated in memory of their investiture to the headquarters of the order” where they decorated the wall of the ceremonial hall along with those of other brethren.

The coat of arms is divided in four parts, with the arms of the paternal and maternal grandparents of the applicant, from the Brandesi of Pisa, whose coat of arms is positioned in the centre.

This is the reading according to heraldic technical terms:

“Divided in four parts, in the 1st (Arms of Salvatici delle Chiavi of Florence) a nude man with flesh-coloured complexion stands against a green background, wearing a belt of leaves and with a club in natural colour on his right shoulder, shown frontally on a ground of the same colour; in the 2nd (Arms of Ricci of Lucca) divided in four decussate parts, in the 1st and 4th lozenge pattern in silver and red, in the 2nd and 3rd a golden star with eight points on a green background; in the 3rd (Arms have not yet been identified) in green, with a strip of red, a black eagle displayed issuing from the ordinary and a flame in natural colour in the lower part: in the 4th (Arms of Santini of Lucca) with green background and two silver lozenges, accompanied a red rose above. Over them all, (Arms of Brandesi of Pisa) in green, with a silver tower, closed and with windows in black, with six embattlements and topped by a right hand in flesh colour holding a silver sword trimmed with gold”.

The arms are contained within a shield with “acanthus leaves, scrolls and volutes flanked by ribbons and enriched by buttons and decorative crazie”. A putto head appears on top, below the cymatium shaped like a conch-shell, at the bottom a mask connects the lower extremities of two decorated drapes. The upper part of the white band bound around the shield, arched as if to resemble a crown, was intended to feature a “war cry”, words or sentences aimed at exhorting the warriors.