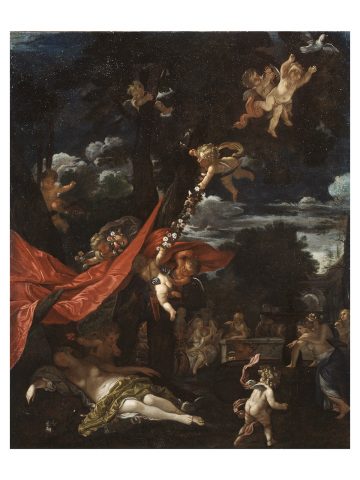 In his biography on Antonio Franchi, a famous painter from Lucca who took the place of Justus Suttermans at the Medici court as court portraitist, Francesco Saverio Baldinucci wrote, around the year 1725: “For the Illustrious G. Prince Ferdinando of glorious memory, he colored a small painting depicting the Garden of Venus, where one could see the goddess, asleep surrounded by a number of playful amorini, and some nymphs who, taking delight in the garden, engage in various activities”. The painting, called the “Small Venus”, had been acquired by the famous member of the Medici family in 1684, and it is definitely a matter of the painting currently at the Montecitorio in Rome, that came from the Gallerie Fiorentine and that had for a long period been part of the inventory of Palazzo Pitti. This “charming and felicitous painting”, oscillating between “the Arcadian classicism of the followers of Albani” and the “humoristic style of Pietro Testa”, at the same time revealing, in the “play with light and the ‘audacious touch’, the influence of Volterrano and Coli-Gherardi, enjoyed considerable success. We are in fact aware that two copies were made, once in 1686 on the request of the Marquis Bartolomei, and again in 1689. This painting may be one of these two versions; in general lines it features the same composition as the painting now at Montecitorio, and the splendid play with lights and shades created on the cupids that are fluttering playfully around the tree from which the pretty red drapery protecting the sleeping Venus from the sun is hung, is also analogous. That it is a matter of an additional, modified version made by Franchi and his workshop is also confirmed by the fact that this painting differs in various details as for instance the presence of personalities that are completely missing from the other, or the greater abundance of fluttering draperies, like the one that is, in this painting, wound around the amorino in the foreground.