Flower vase one stone base with two tulips 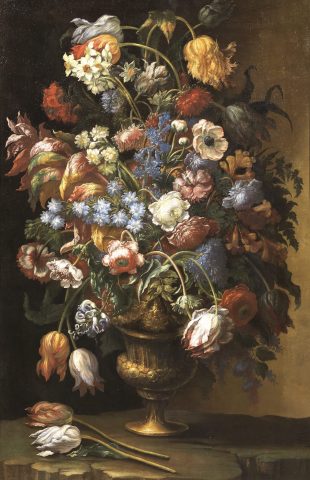 Flower vase one stone base with two tulips

Andrea Scacciati, the artist identified by Sandro Bellesi in his study on the painting, was along with Bartolomeo Bimbi the greatest specialist in the still life genre in the capital of the Grand Duchy. An apprentice of Mario Balassi and later of Lorenzo Lippi, the artist – as his most important biographer, the painter Giovanni Camillo Sagrestani, tells – was trained by the latter in “studying all the qualities of flowers from nature, something he soon mastered so well that he succeeded in becoming the best in Florence, where he was employed by many knights and great lords”.

In the late Sixties Scacciati set up a workshop which received numerous commissions by the ruling class and by various aristocratic families. As to the characters of his style, Bellesi underscores the “descriptive formulas permeated by original eclecticism, essentially altered by a knowledge of Flemish and Dutch Seventeenth-century painters (…) and by the sophistication of the Roman floral compositions of the famous Mario Nuzzi, better known as Mario de’ Fiori”.

The canvas presented here features a wide selection of botanic varieties – listed in detail by the scholar – which form a colourful aggregate, gathered inside a vase in embossed metal. The crafting of the latter and its particular arrangement on an irregular stone top are among the characteristics which, as Bellesi observes, along with the “vivid rendition of the bouquet, whose flowers are still alive and almost seem to dialogue with one another”, allow us to attribute the work to the Tuscan master.
As to the dating, the work may be placed between the end of the ninth and the beginning of the last decade of the Seventeenth century, not far removed in time from the most pertinent comparisons that have been suggested, namely the Vase in gilt metal with flowers on a stone top in a private collection, dated 1688, and the Gilt vase on a top in irregular stone in a private collection, dated to the Nineties.