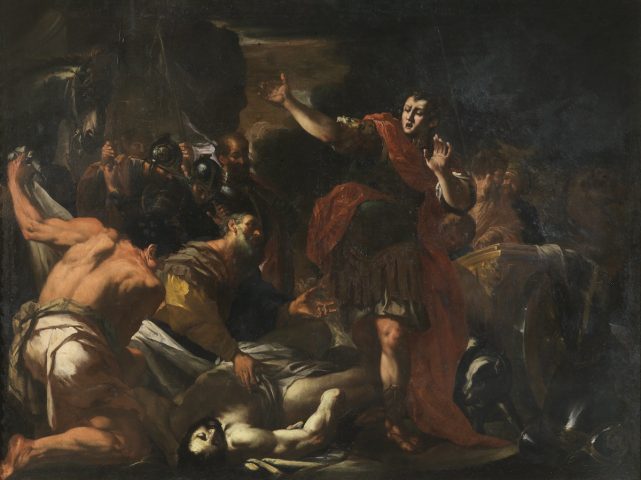 The motif of this vast canvas, which evidently centres on the discovery of the body of a killed man, is difficult to identify. However, the presence of a war chariot and an armature, on the right side, indicates that the painting may feature an episode taken from book 22 of the Iliad: Achilles, after having killed Hector, strips him of his weapons: (“Then forcing backward from the gaping wound / The reeking javelin, cast it on the ground”) and leaves the body for all to see, to the curiosity and amazement of the fighting men (“The thronging Greeks behold with wondering eyes / His manly beauty and superior size”); before he ruthlessly drags the dead body from his chariot, around the city of Troy (“Proud on his car the insulting victor stood, And bore aloft his arms, distilling blood. He smites the steeds; the rapid chariot flies”). The dog which is visible in the foreground may in this case evoke the threats the vindictive Greek hero had previously aimed at the dying Hector (“Thee, vultures wild should scatter round the shore. And bloody dogs grow fiercer from thy gore”).

The author of this ambitious composition may be identified, as confirmed by Achille della Ragiona whom we thank, as the artist who painted the two canvases, similar in terms of format and dimensions, found in the Neapolitan church of the Saints Severin and Sosius, featuring Moses makes water flow from the rock and Aaron turns the water of the Nile into blood, that is to say the Flemish Niccolò de Simone.

The artist, originally from Liège, worked in Naples between the fourth and sixth decade of the Seventeenth century, years in which he was entrusted with important commissions, until his death which probably took place in 1656, the year when the city was ravaged by plague.

We consider that the work presented here may, like the two canvases hanging in the Church of Saints Severin and Sosius, be dated to the mature years of De Simone, when “the painter reaches a highly original synthesis characterized by a felicitous combination between the Castiglionesque-Genoese culture and echoes of academic-classical experiences”.