Diana and the nymphs startled by Actaeon 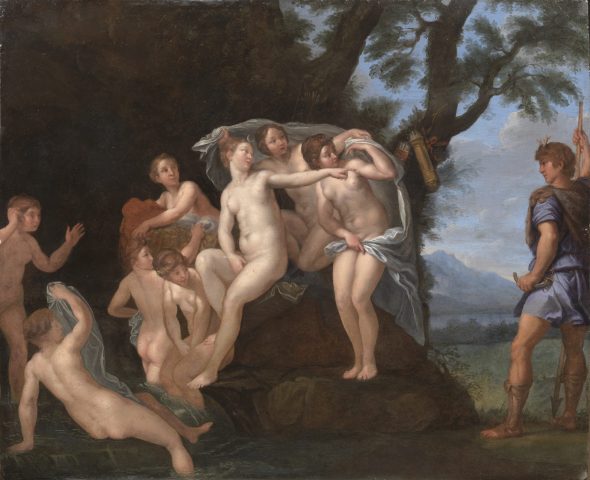 Diana and the nymphs startled by Actaeon

The painting depicts the episode from Ovid’s Metamorphoses (III, 138-252) in which the young hunter Actaeon accidentally surprises Diana and her nymphs bathing in the river. In punishment, the youth will be transformed by the goddess in a stag, destined to be torn to shreds by his own dogs, unable to recognise their owner.

This panel is a replica, believed to be by the hand of the original painter, of a renowned composition by Francesco Albani, one of the most important Bolognese painters of his generation, who built an extraordinary classicist culture between his native city and Rome, together with Annibale Carracci and later Guido Reni and Domenichino.

The painting replicates the version on copper that is preserved in the Louvre and is considered to be the first in the series, with several variations in the draping and especially in the landscape. In this case, the quality of the painting is such that there is no need to speculate on an important intervention by the workshop, and the different conception of the landscape, here bathed in a brighter and more classical light, points to a different version by the same author.