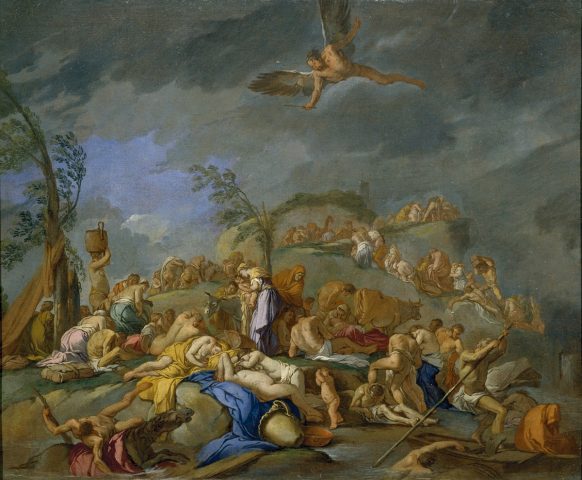 Under a stormy sky, swept by gusts of wind, a crowd of people and animals, by now besieged by the water, try to save themselves. The story is that of the Universal Flood, as told by Greek mythology, according to which humans, having left the primitive world behind thanks to the enlightenment of fire and the teachings of Prometheus, began to feel equal to the gods, neglecting their religious duties; people became conceited, arming themselves against one another, and many wars broke out on Earth. Zeus then decided to destroy mankind by submerging it under water, but Deucalion and Pyrrha saved themselves from the flood (Metamorphoses, I, 348-415). A winged figure  in the upper part of the painting implacably carries out the severe divine order. As Giancarlo Sestieri has confirmed, this work is by Giulio Carpioni, apprentice of Padovanino and one of the most important painters in the Veneto region in the Seventeenth century. The Venetian painter represents an interesting combination between classicism – which is here evident in the splendid anatomic studies and in the predominance of drawing on color – and a strong, very individualized stylistic matrix that does not lack a subtle humoristic vein, visible in the caricatured physiognomies of the personalities, as for instance that of the old woman in a red dress who stoops by the tree in the center, bent by the wind, whose face is rendered in rapid and incisive strokes that underscore her rapacious appearance. In stylistic terms we note the “narrative freedom, enlivened by the use of his graphic painterly style, imbued with light” attained by Carpioni in the last decades of his career. In fact, Sestieri dates the paintings to the late phases of the Venetian painter; the same applies to the analogous work, that only differs in size and some variations, found at the Accademia Carrara in Bergamo.