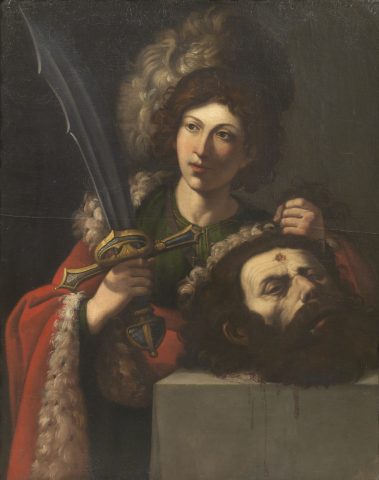 A fashionably dressed young man in a green jacket, red fur-lined cloak, and a splendid feathered hat, which does not cover his thick curly brown hair, displays his saber with a grand silver and gold hilt, proud to have defeated his enemy. The cruel sight of Goliath’s severed head, which can also be recognized by the wound on his forehead, identifies the hero with David, in an elegant and very pleasant composition.

This is a typical work by Lionello Spada, a Bolognese painter and pupil of Annibale Caracci, who came into contact with Caravaggio in Rome, and perhaps entered his workshop. This painting is based on a classical and calm composition, built according to classical schemes, and has a more naturalistic illumination, in which the play of light and dark shows the attention to minute detail and to the cruel painting of Merisi, so much so that it can be dated no later than 1615.

Lionello Spada had used this subject many times, but besides this version only one other remains, in the Dresden Gemaldegalerie. Sources, however, mention many similar paintings present in numerous Emilian collections in centuries past. So the work we present here could be one of those reported by the documents.