Battle between Christian and Turk cavalries 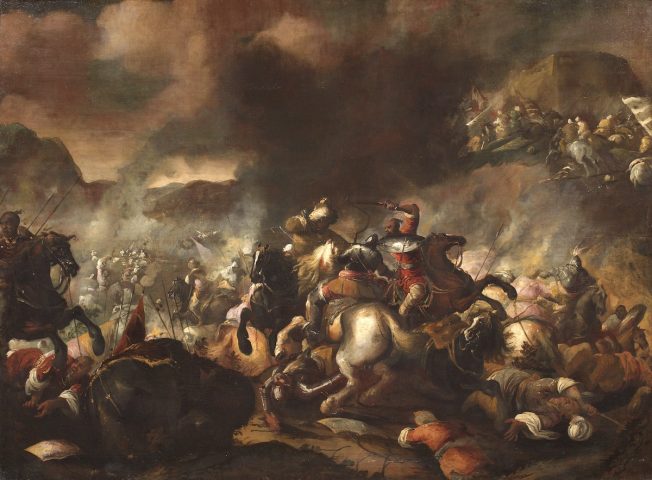 Battle between Christian and Turk cavalries

The author of this large canvas featuring a bloody battle between Christians and Turks, as Giancarlo Sestieri confirms in his study of the work, is Matteo Stom, painter of Dutch origins who worked in the Veneto area. It is a matter of an energetic and vivacious battle painter whose stylistic coordinates are being defined in these years thanks to some important additions to his body of works, as the recently surfaced Nocturnal battle between Christians and Turks before a city in flames. There are two certain references for purposes of reconstructing the work of this artist: the Nocturnal battle in the Gallerie Fiorentine, on the back of which it is written “work by Matteo Stom Venetian 1680” – perhaps a testimonial of a contact with the Tuscan milieu in the second half of the Seventeenth century – and the pair of paintings at the Accademia dei Concordi in Rovigo, documented by an ancient description which remembers the presence, in the house where the paintings originally hung, “two spirited battles with wonderful town and ancient buildings” by the painter.

Characterized by a perceptibly ‘charged’ stylistic cipher that places him close to Antonio Calza, Stom manifests, according to Sestieri, “a rude and almost instinctive painting style, that pivots on dense figurative masses”, proving to be “exceptionally capable of rendering the bloody tumult of the ‘battle’ in progress”. As to the comparisons that are most appropriate to our work, of which the scholar stresses the “brilliant and vivid brushwork”, the “synthetic rendition” and the “flashing luminous effects”, we may mention the Battle between European and Turkish armies with a bridge on the left in a private collection in Brescia, which is also comparable in terms of its similar and ample dimensions.