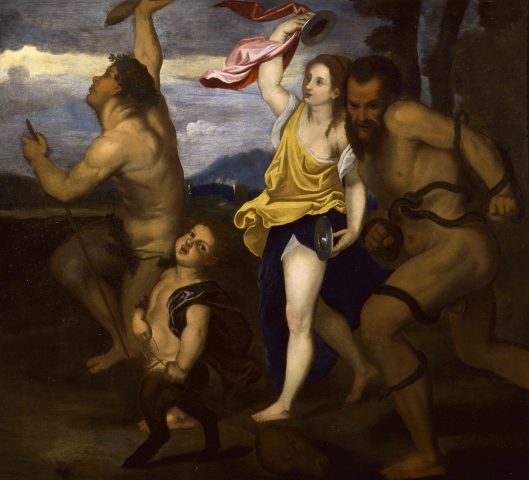 ARTIST ACTIVE IN THE 17TH CENTURY (after TITIAN)

This painting bears witness to Titian’s fortune well into the seventeenth century. Its source of inspiration, perhaps indirect, is the famous Bacchus and Adriane now at the National Gallery in London, from 1522, painted by the Venetian master for the “Alabaster Rooms” of Duke Alphonse I of Ferrara. In 1598 this painting and the other two canvases belonging to the same series were acquired by the Aldobrandini collection in Rome, where it was admired by artists from near and afar.  As of 1638 a partial copy with modifications of Titan’s famous work was registered as part of the collection of the Grand Duchy of Florence (inv. 1912, no. 157); the work, which has for centuries been considered an authentic work by the master and exhibited in important places like the Tribune of the Uffizi and the apartment of the Great Prince Ferdinand, features precisely the same composition as this canvas. This Bacchanal is therefore most probably not a direct copy from Titian’s work, but from a work based on the latter, from the early Seventeenth century, which has recently been defined “a copy […] probably executed in Rome during the 17th century, when Titian’s original work was part of the Aldobrandini collection”.

As compared to the painting in the Palatine Gallery, which as we mentioned enjoyed the status of an original by the master and was as such studied and copied by students, this Bacchanal features few variations, the most evident being the satyr on the left, which is here depicted without a beard.