Architectural capriccio with the Colosseum 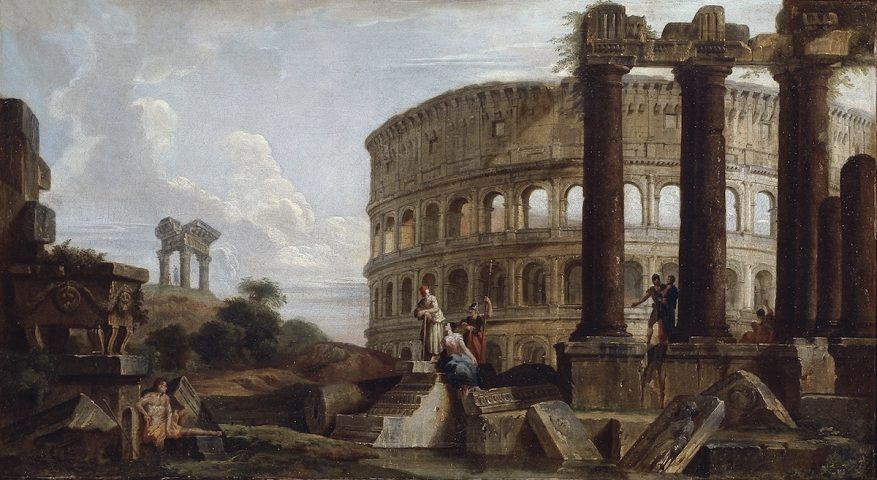 Architectural capriccio with the Colosseum

This painting features a view with Roman architectures and various personalities who are walking around or resting among the picturesque ruins, according to a model that, as pointed out by Giancarlo Sestieri, author of a detailed study on the work,  is inspired by the famous caprices by Piacenza-born Gian Paolo Panini. As observed by the researcher, the success of those paintings explains the considerable diffusion of works inspired by them, executed by “skilled independent artists who lived some time in Rome in direct contact with the Piacenza-born master, or at least certainly with many of his paintings”. Apart from in Italy, Panini had a particularly large following in France (…) “thanks to his excellent relations with the Academy of France in Rome, that hosted  many of the best young artists from beyond the alps of the Eighteenth century”. Charles-Louis Clerisseau, to whom Sestieri attributes this painting, arrived in Rome in 1749 and was a close friend of Piranesi. As the self-same researcher underscores, we know that he dedicated himself to the work of the Piacenza-born artist; in fact, in a letter from 1752, the director of the Academy of France, J. F. De Troy, testifies that the young painter was painting works inspired by Panini in that period.

In particular, therefore, our canvas may be attributed to the youthful phase of Clerisseau, a painter who may be distinguished from Panini due to “a slightly more detailed execution” and due to the personalities “who are more elongated and rendered with less thickly laid paint than in the case of the artist from Piacenza, with personal physiognomic traits that coherently confirm the attribution to the authorship of the Parisian master”. Among the comparisons suggested by the expert, we may mention the pair of archaeological-style views that were formerly at the Galleria Gasparrini in Rome (with a similar representation of the Colosseum) and the Caprice with figure and Roman ruins that was presented by Semenzato in 1991,  where the influence of the artist’s friend Piranesi is however more evident, and which probably dates from a more mature phase.