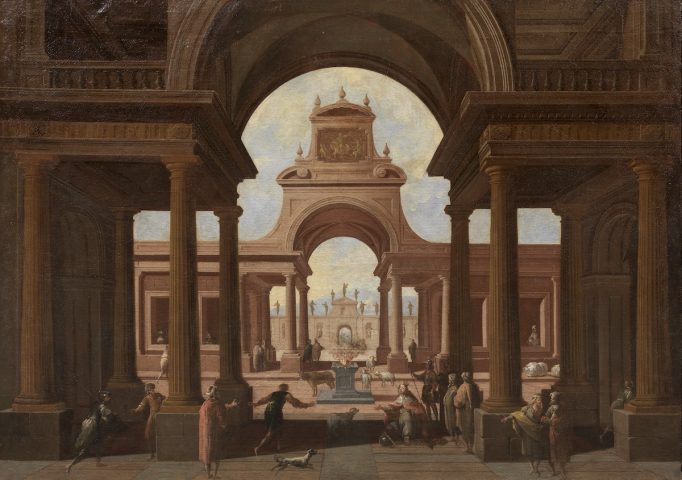 The complex architectonic construction of this painting highlights the talents in this specific field of the author, the Neapolitan Niccolò Codazzi, who like his father Viviano specialized in the genre of caprices and landscapes with classical buildings. In this case the vast canvas is organized in a scenic succession of imaginary buildings inspired by antiquity, placed perfectly parallel to one another, constructed by the artist with a rigorously central perspective. The succession in space of these three imaginary buildings is marked by the grazing light which falls on them, marking the rhythm of the alternation of columns, sequences of porticos and ample courts; the palette becomes progressively lighter towards the horizon, to the last Scamozzi-inspired backdrop, embellished by niches and sculptures.

As is customary in this kind of paintings, the bare architectures are enlivened by nimble figures in various attitudes. In this case the subjects are not easy to understand, but it is probably a matter of scenes from the bible, with personalities of oriental appearance, a kneeling king and a lit pyre surrounded by animals apparently intended for sacrifice.

After the death of his father Viviano in 1670, the Neapolitan painter Niccolò Codazzi moved to France, living in Paris between 1681 and 1682, where he was commissioned four large architecture paintings together with the painter Houasse for the queen’s stairs in Versailles. The extreme classicism of this painting and the typology of the small figures could indicate that it was realized during the French period, before the artist moved to Genoa, as of 1688, where Codazzi worked alongside painters as Gregorio de Ferrari and the Piola brothers.