Adoration of the shepherds 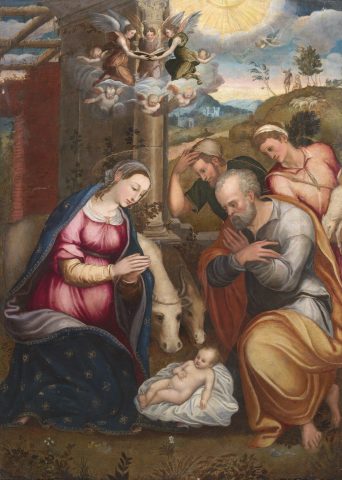 Adoration of the shepherds

Alessandro Ardenti is a painter with a quite complex background and painting culture. One of the keys to understanding this artist is his move from Romagna, where he most probably received his education, to Lucca, where documents prove he lived at least from 1559 until the early years of the eight decade, and then to Piedmont, where he died in 1595.

It is Andrei Bliznukov who has attributed this altarpiece to the exceptional painter from Faenza, who must have attained a certain fame if we are to judge from the fact that he was celebrated by a sonnet by Lomazzo and corresponded with Torquato Tasso. According to the expert, the work may probably be dated to the end of his period in Lucca, when Ardenti painted one of his most representative works, the Cumaean Sybil predicts the coming of Messiah to Augustus (Lucca, Guinigi Museum), painted for the Lucca-born poetess Chiara Matraini, who is perhaps portrayed in the garments of the Sybil. Precisely with this work one may in fact observe significant consonances in terms of style not only with the Adoration of the shepherds from the church of Antraccoli, and now in the same museum (1559), but also with the Madonna with Child and saints of San Salvatore in Mustolio, and with the painting featuring the same motif in San Paolino, Lucca (1565).

Bliznukov, who consider the Tuscan component to be predominant in our Adoration, with some solutions which remind of examples by Dossi, also observes that the painting may be compared with the works by the artist dating from his period in Piedmont. These are however characterized by darker and more contrasted shades, something which is for instance noticeable in the “nocturne illumination” experiment of the Adoration of the shepherds of the Collegiate of Santa Maria della Scala di Moncalieri, a work which has, not unlike other paintings by Ardenti, points of contact with the Flemish school.