View with Saint Mary of Health 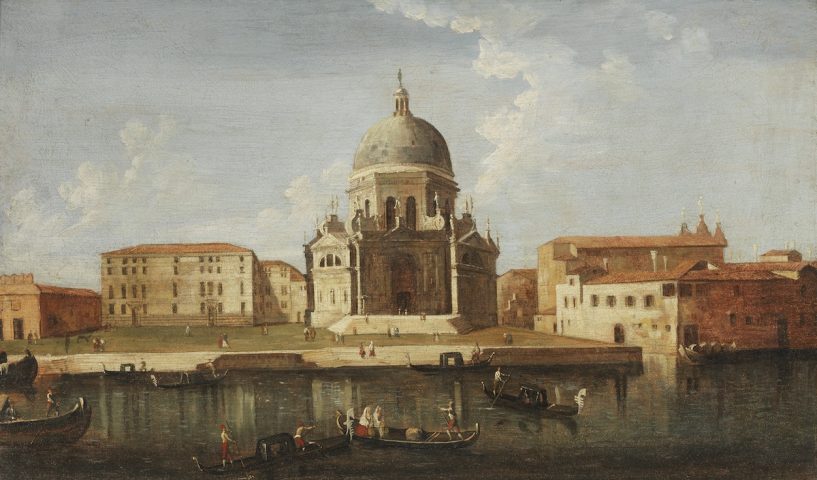 View with Saint Mary of Health

Characterized by a palette based on soft colours, this canvas features the unmistakeable view of Saint Mary of Health, the majestic church built by the Venetians, on a project by Longhena, to thank the Virgin for the end of the plague described by Manzoni, the one of 1630.

The author of this work has been recognized by Dario Succi: it is a matter of Francesco Tironi, an artist whom the scholar has given due recognition with a monographic volume. The painter, who died “while still quite young age around 1800”, was formerly only known for a series of preparatory drawings (Albertina, Vienna; Lehman Collection, New York; Withworth Art Gallery, Manchester; National Gallery, Washington; others in private collections) which served as basis for the realization of etchings by Antonio Sandi, featuring views of the city on the lagoon and published in the late 18th century. The artist has attracted the interest of critics as of the ground-breaking studies of Hermann Voss, who identified him thanks to the discovery of two initialled canvas, to which a third one was linked; these works made it possible to begin the reconstruction of his personality.

As underscored by Succi in his study on the painting, Tironi is characterized “by an eclectic taste which merges, with originality, elements borrowed from Canaletto or Mareschi […] with others inspired by Guardi”. All these elements can be found in the canvas presented here, which is “permeated by a poetic air which efficiently renders the atmosphere of Venice in the second half of the Eighteenth century”. The scholar dates the work, indicatively, to “around 1785”.