The Piazzetta of Venice towards the Punta della Dogana 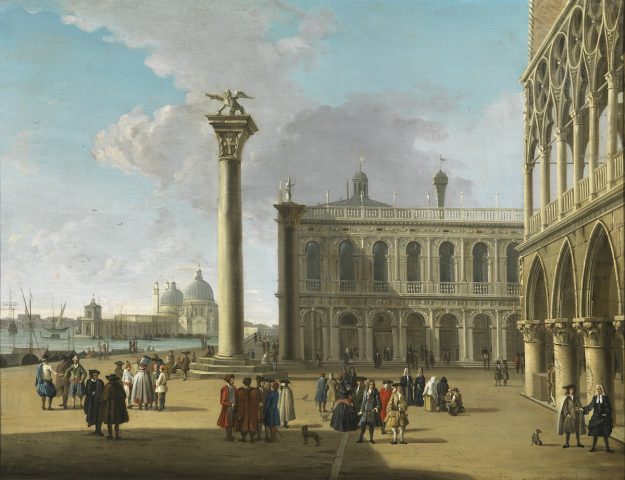 The Piazzetta of Venice towards the Punta della Dogana

This suggestive view of Venice by the Friulian artist Carlevarijs, considered the father of ‘vedutismo’ together with Gaspar van Wittel, provides the viewer one of the most famous perspectives of Venice, one repeated many times by this artist. On the right in our painting is the pier of the 14th century Ducal Palace. In the center are the two ancient columns of Saint Mark and Saint Theodore, this latter placed in front of Sansovino’s Mint, while in the background once can see the evanescent outline of the Customs House point and the church of Santa Maria della Salute.

After beginning as a landscape painter focused on ‘capricci’and fantastical landscapes with classical buildings and ruins, influenced by painters like Cavalier Tempesta and Johann Anton Eismann, Carlevarijs turned to ‘vedutismo’ at the beginning of the new century, a style in which the city is reproduced with exactness and scientific objectivity. This artistic genre was stimulated by the nascent tourism industry and within a few years reached lasting fame in works by Antonio Canaletto, Francesco Guardi and Bernardo Bellotto.

This same view of La Serenissima (Venice) was employed on several occasions by Carlevarijs; in one, to record the entry of the French ambassador Henri-Charles Arnauld into the city, and in another, Britain’s Charles de Montagu, respectively in 1706 and 1707 (Amsterdam, Rijksmuseum; Birmingham, City Museum and Art Gallery). Our painting also repeats this cityscape and is of notable quality and greater size than another similar signed work that came up for auction at Bonhams, London, on Dec. 5 2012 (lot 94, 48 x 68.5 cm). Dario Succi dated this latter work to the 1720s and identified the existence of four variations.