The miracle at the pool at Bethesda 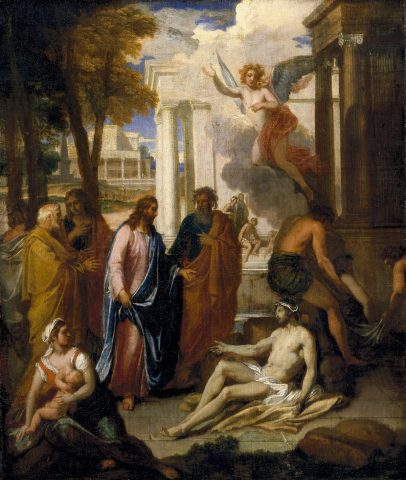 The miracle at the pool at Bethesda

The episode is taken from the Gospel, and describes a miracle wrought by Jesus in Jerusalem “a great many sick, blind, lame and paralytic people” awaited to be healed by the waters of a pool, that once in a while became miraculous, to the first who threw himself into it, by an angel of the Lord. Jesus saw a paralytic who, unable to reach the water, had been waiting in vain for years and told him: “Get up! Pick up your mat and walk. Immediately the man got well, he picked up his mat and started walking” (John 5,1-17).

This interesting painting is, as Giancarlo Sestieri has confirmed, the work of the French painter Louis Chèron, an artist who according to d’Argenville stayed six years in Italy, first visiting Rome and then Venice, and who then returned to France and eventually traveled to England. In the city on the lagoon the artist left his only known work in Italy, the large Pool at Bethesda in the San Pantaleone, from 1683, “perhaps the most advanced and programmatic achievement within the context of an academic classicism that became part of the Venetian figurative culture, between the revival of influences from Veronese and its pre-Seventeenth century consequences and the last stages of the naturalism of the ‘somber’”. The relationship between the great Venetian work and this canvas, whose smallness may explain the typically Venetian rendition which distinguishes it to some extent from the monumental version, is particularly evident in the flying angel, depicted in both canvases with open wings and with the same flowing hair, in the types of personalities and architectural setting, which witness evident influences of a classical type. The attribution of this work to the French master also appears to be confirmed by the etching St. Peter heals the paralytic – note the close resemblance of the personalities and the identical pavement with large slabs – published by Nicola Ivanoff and by the preparatory sketch recently published.