The Eternal Father appears before Jacob 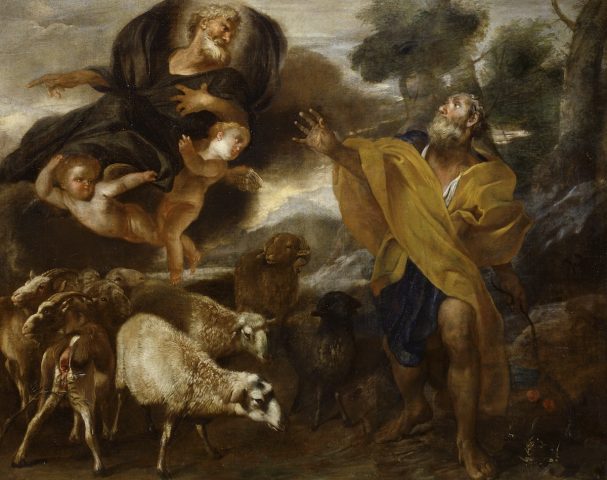 The Eternal Father appears before Jacob

This painting depicts the moment, described in the Old Testament, in which God appears to Jacob, son of Isaac, telling him: “Return to the land of your fathers and your relatives, and I will be with you”. (Genesis, 31). The patriarch, surrounded by his flock, is shown as he gazes in amazement at the apparition of the Eternal Father supported by angels.

It is Mina Gregori who has attributed this canvas to the Genoese painter Giovanni Benedetto Castiglione, also called Il Grechetto; she has defined it “an important addition to the youthful period”. In her writings the scholar has placed the work, painted with the Genoese master’s typical technique with parallel strokes, which may be observed both in the fleece of the animals and in the complexion of the personalities, to the years of the Roman sojourn of the famous Genoese painter, whose presence in the Eternal City is documented as of 1632. A singular resemblance had in particular been observed with two paintings – Jacob’s Journey dated 1633 and the Tears of Saint Peter – by the Roberto Memmo Foundation of Rome. Gregori has observed a close resemblance with these works, which may be dated to before 1634, in particular with reference to the male types painted “with illuminated white beards” and the angels.

The recent publication of a work documented as a Grechetto in the inventory records of the collection of Palazzo Baldi in Genoa (1701) and initialled “Gio”, the marvellous painting featuring The rediscovery of Cyrus nursed by a female dog, may serve as further corroboration of Gregori’s intuition. In fact, in this canvas from a private collection, which Orlando defines as “one of the masterpieces of the first Castiglione […] after his encounter with Poussin’s work in Rome in the years 1632-1633”, there is a naturalistic scene with a flock of sheep on the rights side. Some of the animals may be superimposed on those featured by our painting, and more specifically the two lambs to the left, one of which impudently shows the onlooker its rear end.