The entrance to the Grand Canal with Santa Maria della Salute 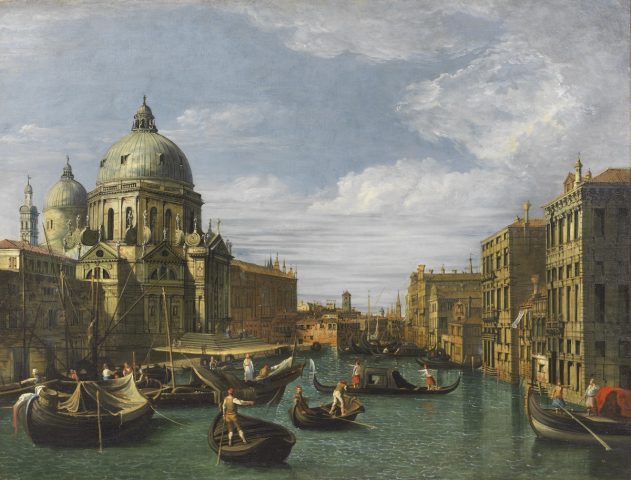 The entrance to the Grand Canal with Santa Maria della Salute

This canvas, already part of a Roman collection, depicts with incredible accuracy the spectacular entrance to the Grand Canal, dominated by the pure white building of the seventeenth century basilica of Longhena, named after Santa Maria della Salute.

Bernardo Canal, father of Antonio also known as Canaletto, was a member of the Fraglia of Venetian painters in 1717 and again from 1737 to 1743. Bernardo specialized in landscape painting, availing himself of the collaboration with his sons Cristoforo and Antonio; the latter destined to become the most famous Venetian landscape artist with the name of Canaletto.

The critical restoration of the painter Bernardo Canal began with Pallucchini’s finding of a canvas depicting Piazza San Marco looking west towards San Geminiano signed and dated 1734, followed by the appearance on the antiques market of two landscapes, also signed by the artist and dated 1737. Stylistically very close to Carlevarijs and Richter, Bernardo Canal drew inspiration from the successes of his son, active from the second decade of the eighteenth century.

In this case, as a matter of fact, the artist paints in a much bigger format one of Antonio’s creations, kept at the Museum of Fine Arts di Houston (inv. n. 56.2; 49,5×73,7 cm), reproducing not only the architectures, but also the characters that, with a surprising variety of carefully designed gestures, throng the waters of the canal on their boats.