Mosè and the crossing of the Red Sea 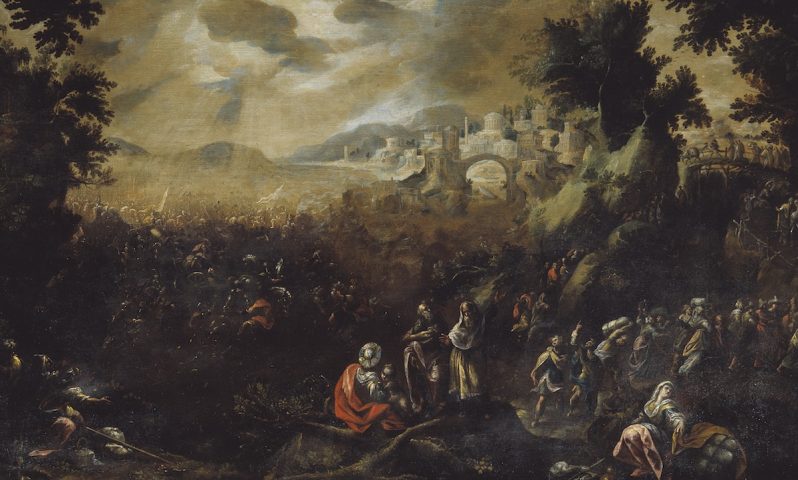 Mosè and the crossing of the Red Sea

This large painting features the biblical episode of the Crossing of the Red Sea (Exodus, 14, 19-31), in which Moses, guided by the Lord, miraculously crossed the waters separating him from Palestine with the people of Israel, while the entire Egyptian army pursuing them was submerged. The exodus is shown by a vivid image of a multitude of people on the move under a tempestuous sky, with fascinating flashes of light, as described by the biblical passage “and it was a dark cloud, yet it illuminated and it was a cloud and darkness to them, but it gave light by night to these” (Exodus, 14:20).

The motif and author of this work have been identified by Giorgio Faggin, who retraces it, in his study on the painting, to the hand of Gillis van Valckenborch. Born in a family of artists, he visited Rome, and perhaps Venice (O. Benesch), in the Nineties of the Sixteenth century, along with Frederick, his elder brother. In the wake of Paul Bril, who had been in Rome already as of the late Seventies, the Valckenborch brothers, like Hendrick De Clerck, Jan Brueghel, Sebastian Vrancx and others “were still inspired by Sixteenth-century Antwerp, while enriching the repertory of motifs in contact with the Italian landscape” taking an interest in antique ruins and, in the case of Frederick van Valckenborch, as well as his brother, acquiring a peculiar familiarity “with Venetian art and above all with the strong luminous contrasts of Tintoretto’s painting”. Characteristic traits of the Valckenborch brothers comprise the stylized gestures, the love of colourful multitudes and fantastic landscapes immersed in fascinating nocturnal settings, as witnessed by the defeat of Sennacherib by Braunschweig, which is, as the expert observes, among those of Gillis’ paintings that are particularly close to this work, or by the painting with the same motif found at the Louvre.