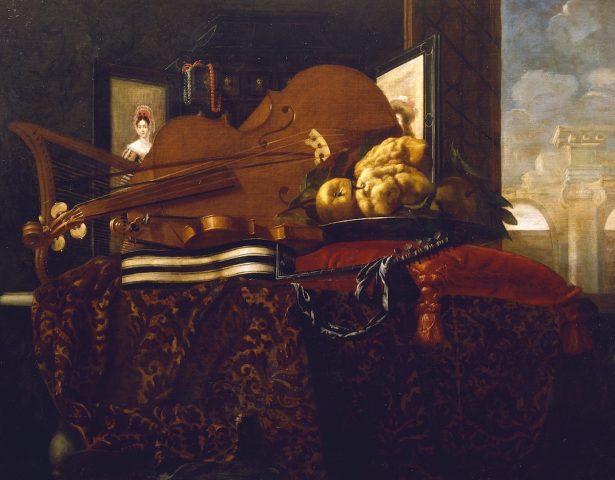 FRENCH MASTER FROM THE 18TH CENTURY

This fascinating painting featuring various musical instruments and a large dish with citrons and apples, carefully placed on a lush red velvet cushion, is characterized by the presence of two tasteful small portraits that form the doors of a lavish money-box in ebony with ivory inlaying. Precious necklaces are hanging from one of its open drawers; along with the noble architectures visible through the open window, they contribute to create the atmosphere of flaunted opulence that dominates the painting. The portraits, in particular, indicates that this canvas dates from a more recent period than the style and general arrangement would otherwise suggest, or in other words the Seventeenth century. Another very characteristic element is the low angle of observation that makes the painting quite particular, distinguishing it from, for instance, analogous representations of musical instruments by Baschenis and other painters from northern Italy. Following a useful verbal indication by Giancarlo Sestieri, whom we would like to thank, we will for the moment place this interesting still life in a French context, dating it to around the second half of the Eighteenth century; in the future we may be able to give the painting the precise attribution which it deserves.