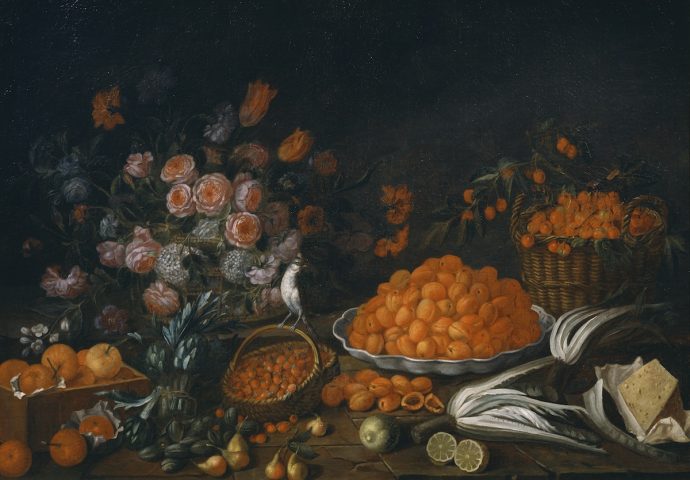 FRENCH ARTIST FROM THE 18TH CENTURY

A large display of naturalia is arranged on a floor, whose joints can be glimpsed. It is mostly a matter of fruit – we recognize apricots, strawberries, lemons, cherries, plums, pears and oranges – of flowers – roses, tulips, carnations – and of vegetables as the cardoons at the bottom right and the artichokes to the left. A small bird is poised on the handle of a basket.

On the basis of the delicate chromatic chords and the arrangement of the objects, this work may be retraced to the school of French still life painting in the years after the middle of the Eighteenth century, when the climate was already characterized by an opening towards the bourgeois world. A painting quite similar as to presentation of objects, which are also in this case arranged in containers or scattered in the foreground, resembling this work in terms of sensibility, attributed to a French school and dated 1777, was presented by Sotheby’s in 2004 (Old Master paintings, 07.12.04, lot 579).