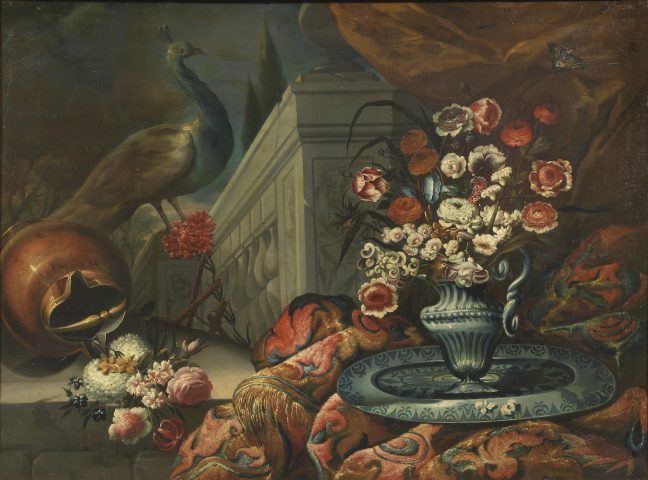 active in Verona at the end of the 17th century, first half of the 18th century

This pendant with large still lifes, characterized by great freshness and by the effective decorative intent, combines a varied repertoire of flowers, fruit and objects, such as the foreshortened mezzina in one of the canvases, with the presence of live animals. A proud peacock towers in one of the paintings, perched on a balustrade prospectively foreshortened in the background, and a butterfly is flying near the flowers placed in a ceramic vase. In the other canvas, it is worth drawing attention to the small scroll with the inscription “perti/gna”, inserted in a woven straw cord of a flask, possibly a rebus.

The duality of the still life, the representational spontaneity, the classical architectures marked by crevices and crackings, are recurring motifs in Felice Fortunato Biggi’s work, also known as Felice dei Fiori, to whom these canvases have been attributed. The artist, likely from Parma, probably studied in Rome with Mario dei Fiori, remembered in his early paintings. The biographer Pellegrino Orlandi, in the eighteenth century, writes that Felice “took refuge in Verona where he lived until the end of his life” working on other paintings for international commissions “that were largely paid”.

Another work worth mentioning for comparison is the early painting which was recently on the antiques market and signed “Felix B fecit”, made in the seventh decade of the seventeenth century, depicting both dead and live animals.