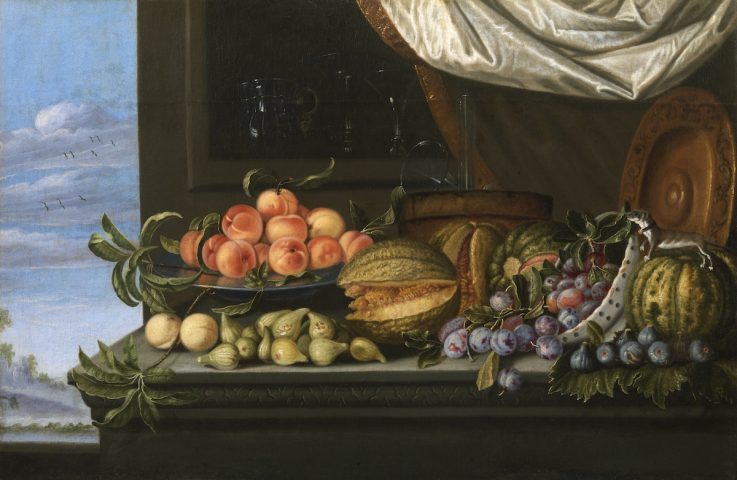 This still life, characterized by well-defined and luminous forms, is an attentive rendition of summer fruits arranged on a stone table in the classical style. The arrangement of fruits is framed by a glimpse of a landscape, a row of glasses of various shapes and a sumptuous drapery, whose shade grazes a decorative plate, leant vertically against the wall.

The painting has been recognized by Alberto Cottino as the work of the French painter Pierre Dupuis, an artist who lived in Italy in his youth – he was in Rome approximately between 1630 and 1640 – and who, according to the scholar, came into contact with the local specialist Agostino Verrocchi in those years.

As underscored by Cottino, the painting in question has many points in common with a composition by the French master which was described as a work from the artist’s mature years in a publication some years ago, which was painted after 1660. The work presented here essentially features the same composition, with some slight alterations which are noted by the scholar, and which are sufficient to indicate that this painting may be subsequent in time to the painting to which it is compared, and that it may have been executed by the master himself, perhaps with the help of an assistant, as suggested by the slightly more schematic rendition observed by the scholar.