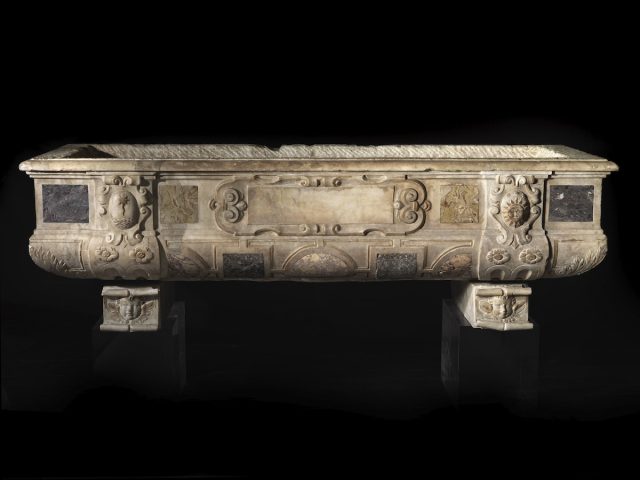 This refined sculptural element was originally part of a very important wall monument. The arch is late Renaissance and should be imagined in its original context, supported by corbels – the upper elements decorated with the heads of cherubs – and surmounted by a cover on which would have probably been carved an image of the deceased.

As reconstructed by Alberto Bruschi who authored a detailed artistic and heraldic study of this arch, it must at one time have been located inside a building – a theory supported by its good state of preservation – and in an elevated position since there is “a decorative element composed of a double three-petaled figure” which can only be seen from a certain vantage.

Although the name and information relative to the person for whom the arch was originally intended, at one time contained in an epigraph within the central cartouche, are missing, “the two somewhat crumpled shields carrying family crests which are carved into the front” provide us the names of the two families who were connected to this arch; on the right is the crest of the Fantucci of Siena (“Blue with a golden sun accompanied by three stars having six rays each”), while on the left is the crest of the Marzetti from Altidona (“Blue with a golden undulating comet above a natural sea”)

Crollalanza recounts that the former were from the city and countryside around Siena, while the latter were originally from Abruzzo, later settling in Viterbo, though there is mention of the family in Pesaro and Bologna as well.

Central Italy, second half of the 16th century