Saint Joseph adorating the Child and an angel 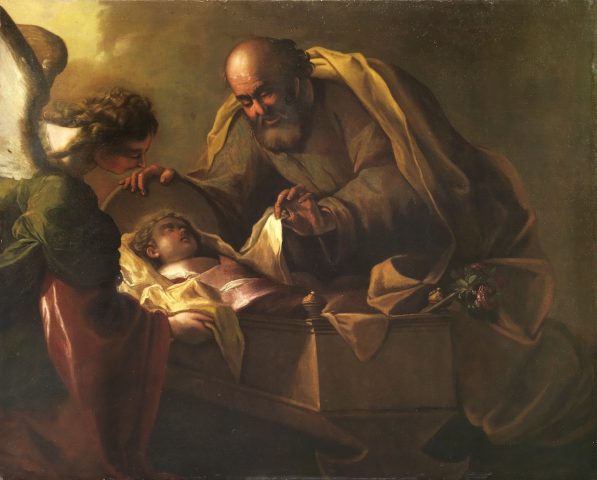 VENETIAN MASTER OF THE 17TH CENTURY

Saint Joseph adorating the Child and an angel

Kept in the background of religious iconography for a long time, Saint Joseph, putative father of Jesus, finally witnessed a growing fortune starting from the 17th century. Supported by the devotion of Pietro d’Alcantara and Teresa d’Avila, and, in a broader sense, by the Jesuit order, Saint Joseph lost his marginal role and became a central figure in pictorial depictions of widespread diffusion. Among these, of great significance is the Transito di San Giuseppe, which depicts the “good death” of the centenarian Saint Joseph, surrounded by the Virgin Mary, his wife, and by Jesus, his son. This subject, while unknown during the Renaissance, enjoyed great popularity during the Baroque period.

In the painting here presented, Joseph, assisted by an angel, gazes upon Baby Jesus, who is resting on an elegant cradle. The identity of the Saint becomes clear with the detail of the flowering staff depicted in the shadow on the left, a distinctive feature of Joseph that references the miraculous episode that, according to tradition, led Mary to choose him as her spouse.

On a stylistic point of view, the painting can be dated to the declining phase of the late Baroque, between the end of the 17th century and the first decades of the 18th century, often characterized by the recovery of the Mannerism: artificial colours, artistic preziosismo, elegances taken to the extreme. The angel on the left seems to echo the work of Sebastiano Ricci, the great Venetian artist and one of the most influential authors of the 17th and the 18th century, an indication that allows us to locate the painting in the Veneto region or, as an alternative, in Lombardy, both marked by the legacy of Belluno’s artist.