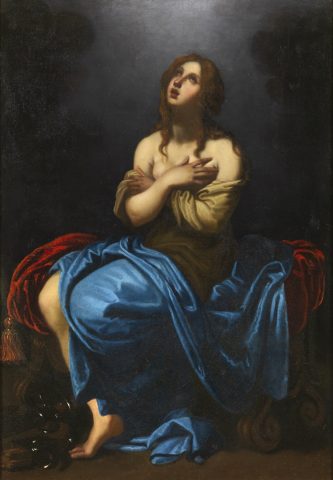 This beautiful canvas depicts Saint Catherine of Alexandria in a somewhat unusual iconography. It is in fact not the usual representation of a maiden dressed in the garb of a princess (she was the daughter of the king of Alexandria of Egypt), but rather she is pictured sitting on a large red velvet draped faldstool, dressed in a tunic that descends from the shoulders leaving the breast uncovered. The azure cloak covers one of her legs and is also draped over the seat. The flowing hair and skyward gaze would seem to indicate a Magdalen, but on the ground the hilt of a sword and fragments of a spiked breaking wheel, both symbols of this Saint’s martyrdom, appear as inserts of Caravaggiesque naturalism.

The composition draws from a series of pre-existing paintings of Saint Agnes, which all refer back to the version in the Luzzetti collection dated 1631. The version closest to ours is the 1631 Saint Agnes, signed and dated, with her matching Saint Dorothy, both present in this catalogue. This work belongs to a very beautiful phase in the artist’s career, who in his full maturity reaches the highest peaks of quality, utilizing a fully baroque form.