Rinaldo in the Enchanted Forest 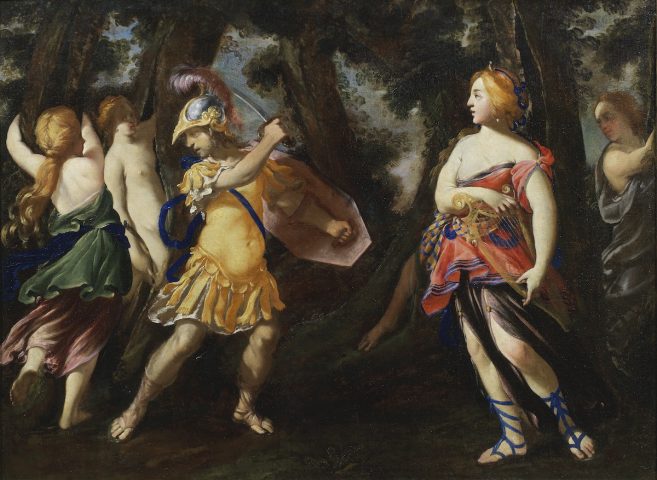 Rinaldo in the Enchanted Forest

The unusual motif featured by this canvas is taken from an episode of Torquato Tasso’s Jerusalem Delivered (canto XVIII): Rinaldo, one of the Christian captains whose feats are told in the poem, comes to an enchanted forest inhabited by “furies, goblins, fiends and sprites”. An oak beside him suddenly opens up and reveals its fertile womb, and as he watches a hundred lovely nymphs are born from this tree and from a hundred others. The deceptively pretty young maidens “whose arms half-naked, locks untrussed be (…) // with buskins laced on their legs above // and silken robes tucked short above their knee” dance around the hero, playing music. Then suddenly the sorceress Armide appears, in the guise of a splendid young woman, seeking to seduce him. Rinaldo does not yield to the enchantment; he raises his sword without heeding her prayers and fights the captivating witch and her handmaidens, who have turned into monsters.

The painting has reached us with an attribution to Giulio Carpioni, as suggested by Federica Spadotto. The scholar has retraced the work, which she defines a “precious testimonial of the quite unknown initial phase of Giulio’s artistic career” to the youthful period, around 1630, of the Venetian artist, who was a leading figure of the artistic milieu in the city on the lagoon in the Seventeenth century, stressing its “exquisite chromatic impasto and the appreciable parts in chiaroscuro”. As corroboration of her opinion, Spadotto has compared the painting with the frescoes, painted at a later date, in the “Carpioni room” of Villa Caldogno, Vicenza.