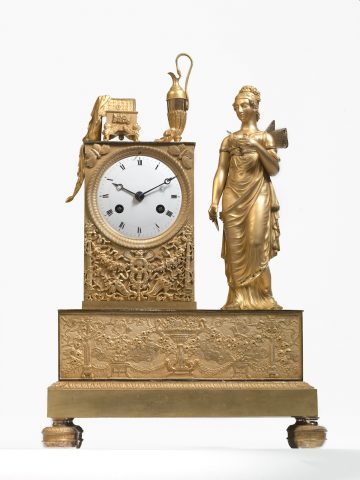 This mantle clock is dedicated to the mythological figure of Psyche, whose relationship with the god Amore inspired the creation of numerous artistic objects. The young woman carries a knife to defend herself and holds a lamp; by letting a drop of boiling oil fall from the latter, she will reawaken the sleeping Cupid and thus make him escape (Apuleius, Metamorphoses, V, 23). Various objects in the neoclassical taste appears on the clock case: an ansate amphora and a refined casket decorated with sphinxes. The figure of the butterfly deserves particular notice; in addition to lending the goddess its wings, it appears in several points in the decoration. With its silent and light flight, the butterfly alludes to the ancient interpretation of Psyche as human thought.