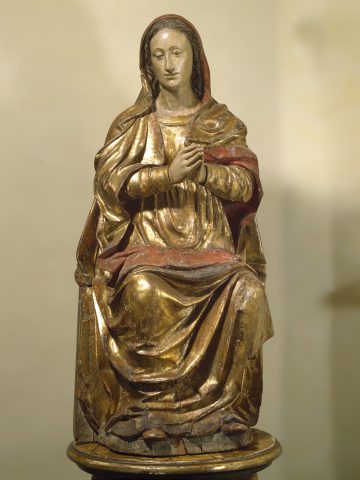 The Virgin is seated on the throne; her hands are gathered before her breast in prayer, according to the traditional Venetian iconography. The face, framed by waved hair divided into orderly locks, is partially covered by a veil with engraved borders, that is bright red on the inside. In the point where it reaches the Virgin’s lap, it rests on her legs to form a kind of support, where the child probably once rested, according to tradition.

Images of the praying Madonna on the throne were very diffused in the area of Lombardy and Veneto as of the early fifteenth century. Important examples comprise works by Giovanni Zabellana in Verona (documented in the city between 1485 and 1505), Clemente Chiari in Brescia (documented between 1480 and 1540), and the Venetian Moranzon family, active between the fifteenth and sixteenth century. As compared to these authors, however, this Praying Madonna is characterized by a more monumental and classical spatial impact, more nonchalant movements and an ample drapery crafted with extraordinary skill; all these elements suggest a dating well into the Sixteenth century; similar combinations between Venetian and Roman elements may be found in the works of the painter Sebastiano del Piombo.