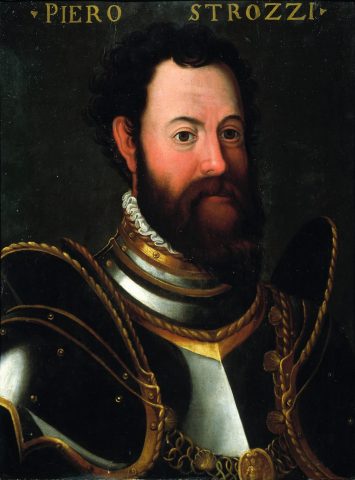 This painting on wood, which may be attributed to the workshop of Alessandro Allori, a refined painter and former pupil of Bronzino, features a famous personality of Florentine origin, the condottiere Piero Strozzi (1510-1558). An enemy of the Medici, he spent much of his life outside the Duchy of Florence, even going so far as to threaten the Medici Signory. With the title of general lieutenant, he unsuccessfully sought to defend Siena from the hostile designs of Cosimo I in the years of the war which resulted in the annexation of the Sienese territories to the Duchy, between 1554 and 1555. He died in France in 1558.

Rendered with the idealized face and complexion characteristic of Allori, the condottiere is shown wearing the armature of the period, decorated on the breast by a collar with a medallion which qualifies the bearer as a knight of the French knightly order of Saint Michael. It is most probably a matter of a posthumous portrait, of which various versions are known: one is part of the “Gioviana” series of the Uffizi, attributed to Cristofano dell’Altissimo and dated to around 1587, one was formerly part of the collection of Alberto Bruschi, interpreted as a higher-quality derivation of the work in the Uffizi; another, in this case a full-figure portrait, in the collection of the Palazzo Vecchio, which has been considered the work of “Unknown from the 16th century” is actually attributable to Alessandro Allori.