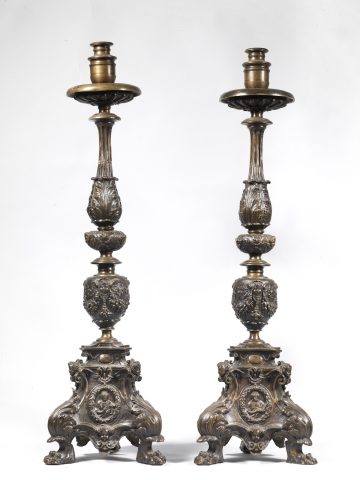 Important candelabra attributable to the prestigious Venetian school, among the most esteemed for the creation of bronze artifacts during the sixteenth century. The baluster central piece is divided, from the bottom, in a cup with flower and angel garlands, a rounded knot with cherub heads and a leafy tuft from which a ribbed and cabled element departs, supporting a fluted small plate topped by a candle holder vase.

The vertical element is placed on a tripod base whose sides, framed by angel heads and cherubs, leafy elements and volutes, are centered by wreaths inside which three figures, in a solemn Renaissance pose, are depicted, apostles Peter and Paul and John the Evangelist, who supports the goblet with the snake.

Veneto, second half of the 16th century
height 75 cm