Magdalena in the desert 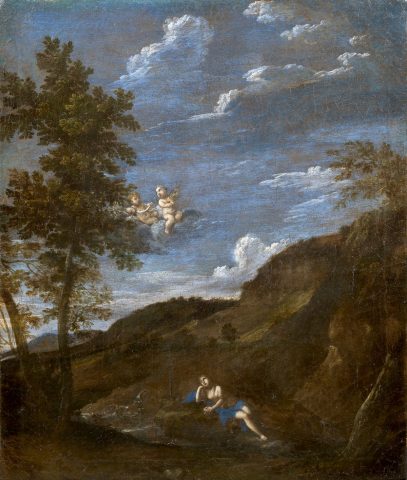 ROMAN ARTIST FROM THE 17TH CENTURY

Magdalena in the desert

In the centre of an airy landscape that slopes towards the horizon, framed by slender, leafy trees, a scantily clad woman, recognizable as Saint Maria Magdalena due to the skull on which she rests her hand and the crosses driven into the ground nearby, seems to reflect repentantly on her past as a prostitute. The saint’s face looks up at a pair of sympathetic little angels who are busy striking up devout, heavenly melodies. The landscape setting, in which the heroes of the story almost seem to play a secondary role, evokes the classical landscape promoted in Rome by Emilian and French artists, from Albani to Gaspard Dughet. However, we observe a more pictorial manner and quite characterized faces in this canvas, which evoke, rather than Seventeenth-century classicism – that was certainly familiar to the author of this canvas – the experiences on this matrix combined with influences from Baroque and Venetian painting, as for instance Pier Francesco Mola (1612-1666) and Filippo Lauri (1623-1694).