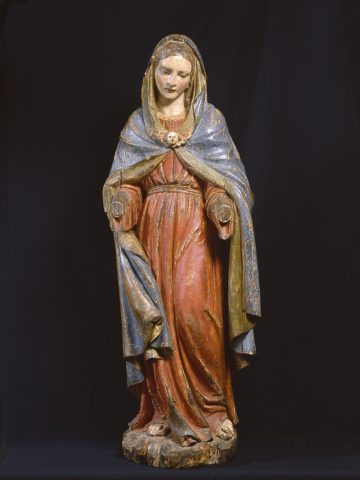 The Virgin is rendered with a timid expression, and looks modestly downwards, something that makes one suppose this sculpture may have been part of a holy group, or that it has been placed in a raised position, in the center of an altar. The expression is gentle but firm, the cheeks slightly red; a blue veil held in place by a cherub-shaped clasp on her breast covers her head and shoulders, creating a softly folding drapery. The right leg, that folds slightly as stepping and the somewhat inclined face give the sculpture a sense of dynamism.

Among the countless sculptors who worked in Southern Italy in the first half of the Sixteenth century, this Madonna seems close to the style of Giovanni da Nola, perhaps reflected in the work of a follower from the Apulia region. The commercial relations that united the Adriatic shores of Apulia with Venice, along with the political and administrative dependency on the Viceroy of Naples, explain the reasons for the diffusion of different cultural genres in this region of Southern Italy.