Leander and the Nereids 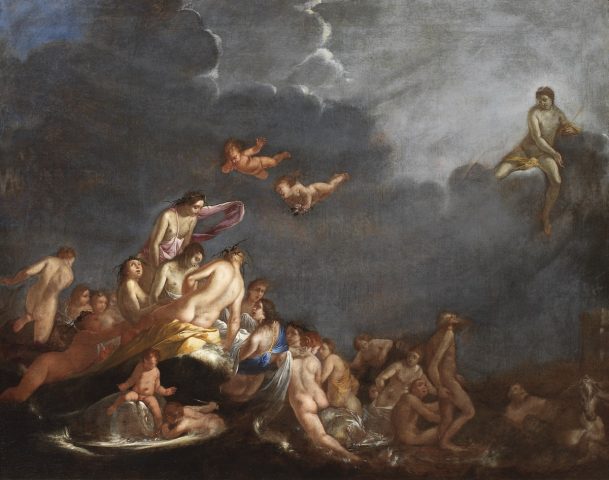 Leander and the Nereids

A leading figure in the genre with profane and mythological motifs that was so popular in the Veneto area, Giulio Carpioni, who was a pupil of Padovanino in Venice and who then, after a period in Rome, worked in Vicenza where he died in 1678, “dedicated himself to conceptual inventions, as dreams, sacrifices, bacchanals, triumphs and dancing putti” (Orlandi, 1704).  The painting featured by this shield belongs to the most characteristic repertory of the painter, dominated as it is by the sensual exhibition of the nude Nereids who transport the lifeless body of Leander. The latter swam across the Hellespont every night to be with his beloved Hero, who waited for him on a tower with a flaming torch to guide him. One night a tempest extinguished the flame, and the youth drowned, followed in his fate by his shattered lover.

The Venetian painter interpreted this scene more than once, as witnessed by the various, often smaller, versions of this motif today at the Magnin Museum in Dijon, in the Donzelli collection in Florence, at the Museum of Fine Arts of Budapest and at the Civic Museum of Padua, which has a Death of Leander of which also a preparatory sketch has survived. In addition to these works, published by now half a century ago in the monograph on the painter, there are others as those included in the photo archive of Federico Zeri (numbers 56918, 56857), which also contains a photo of this painting, correctly attributed by the scholar to the master from Vicenza (no. 56908).