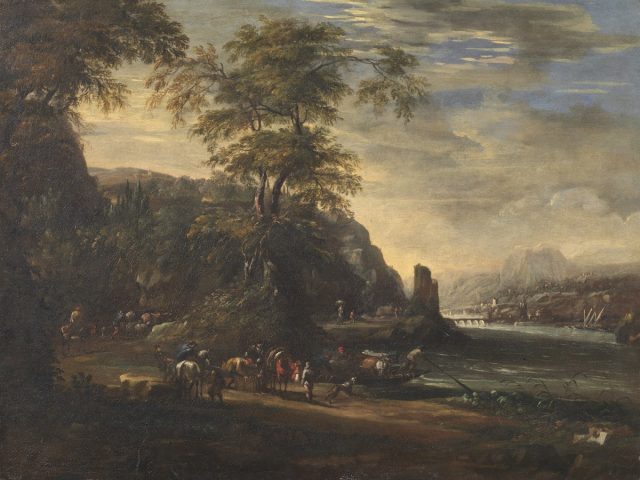 It is due to Dario Succi that this painting has been reattributed to the original master of Salzburg. Eisman – who as the scholar points out “made an essential contribution towards introducing landscape painting in Venice and making it popular” – moved to the lagoon around the year 1660. The German joined the painters’ guild of the city from 1787 to 1700 – something which would contradict the traditional date of death – specializing in the realization of landscapes and battles whose combination of savage nature and Roman ruins bear witness to the influence of Salvator Rosa, but which are enlivened by the characteristic repertoire of animated spots which, according to Succi, “antedates the motifs of Luca Carlevarijs”.

It is above all the ‘atmospheric’ rendition of the sky in this painting that deserves notice; it is a matter of a characteristic which, as Succi underscores, Eduard Safarik already pointed out years ago as one of the most important qualities of the paintings by the German artist.

As to the date, the author of the summary on this painting “in view of the particular composition and the free brushstrokes” suggests the ninth decade of the Seicento, thus identifying them as predating the “landscape caprices which in the late Seventeenth century were to make Luca Carlevarijs, the Friuli-born artist who evidently benefited much from the lesson of Johann Anton Eismann, famous”.