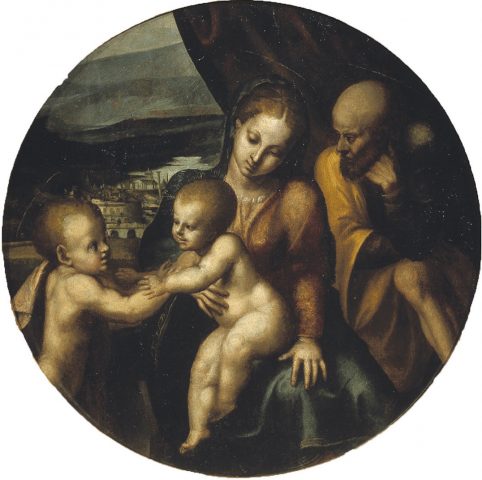 SENESE PAINTER FROM THE 16th CENTURY

This circular painting depicts the Holy Family, with the Virgin Mary in the centre holding the infant Jesus. On her left, the figure of Saint Joseph benevolently observes the scene, while the half-bust figure of Saint John the Baptist appears on the opposite side, reaching to hug his cousin.

This splendid circular panel fully belongs to Senese culture of mid-sixteenth century, dominated by Sodoma and his close followers united in the reaction against the influence of Leonardo da Vinci. The painting presents certain details that are perfectly in line with the entire figurative production that can be called anticlassical, and that spans from Domenico Beccafumi to Genga, all the way to the so-called Marco Bigio and to Riccio. Specifically with the latter, stylistic parallels seem to suggest full attribution, but the expressive charge and the quality of the painting are possibly even superior. It is however a deeply important testimonial of the culture of Siena in that period.