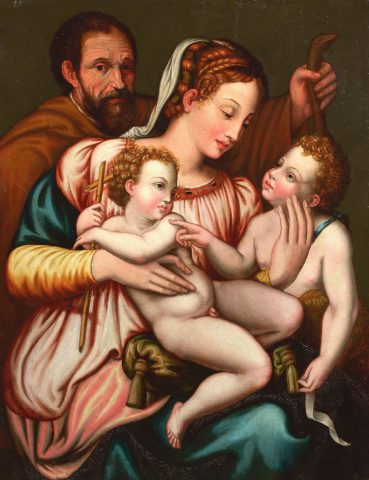 Active in Florence around the middle of the 16th century

The reason why this work on wood has been subject of such uncommon interest is largely attributable to the figure of Saint Joseph, whose face immediately appears recognizable as that of the great Michelangelo Buonarroti, here shown in his mature age. The portrait, characterized by a certain realism and apparently not retraceable to an existing image, could according to Alessandro Nesi, author of a study of this painting, be the result of a direct familiarity with Michelangelo on the part of the painter. The expert has ably identified the latter as a certain “Imolensis” who in 1546 signs another Holy Family, now at the Pushkin Museum in Moscow, with this place of provenance. Nesi correctly compares the work in the Russian museum with a painting featuring a similar motif, namely the work found in the Church of Cristo Re in Camucia (Arezzo) – the expert stresses the significant contiguity between the latter and a drawing by Buonarroti – as well as with a Holy Family with Saint John the Infant that has been presented by Pandolfini (3 October 2006, no. 185). The latter, whose style is more graphic than the other two, but which is undoubtedly by the same author – as witnessed by the physiognomy of the Virgin in the three painting – is the work that acts as trait-d’union with the work presented here, as it not only shares the stylistic manner but also the strong influence of the work of Giorgio Vasari, who along with Michelangelo was evidently an important source of inspiration to our Imolensis.

In fact, the work on wood presented here is a derivation, with some variations, from a prototype by the artist from Arezzo, which may be dated to the mid-Forties (Munich, Alte Pinakothek). However, the effigy of the great master in the guise of Saint Joseph is a completely autonomous creation by our “Imolensis”, and a very interesting example of the “sanctification” of Buonarroti, an unrivalled model for several generations of Florentine artists, which reached its apex in the devout and passionate biography contained in Vasari’s Lives.