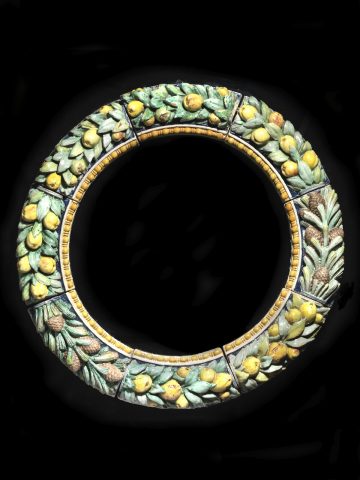 “[…] art remained deprived of the true way to make glazing” complains Vasari in the second edition of his Lives, referring to the epilogue of the Della Robbia family. By the second half of the Sixteenth century – the Arezzo-born historian and artist writes in 1568 – the glorious technique of sculpture in glazed terracotta developed by Florentine sculptors in the 15th century, when atelier secrets were jealously handed down from father to son, were falling into disuse. Only much later, in the Nineteenth century, were sculptures in the manner of the Della Robbia family to enjoy a vivacious revival.

The specimen we present here, a garland formed of eight segments featuring fruits and leafy elements accompanied by an internal frame with a succession of spheres, is an example of the works of art which were inspired by the tradition of the Della Robbia workshop, which flourished in various parts of Italy towards the end of Renaissance. Even if these products sometimes were more closely related to majolica pieces than to terracotta sculpture, favouring aspects linked to the use of glazes rather than to true modelling, we know of more ambitious examples which seem to take inspiration from the virtuosity of the Della Robbia family in a manner that is more faithful in a conceptual and technical sense. Among these, as underscored by Giancarlo Gentilini, Jacopo Beneventano assumes a particularly important role by virtue of the great altar signed by him and dated 1522, realized for Saint Peter’s at Acquapendente (see G. Gentilini, I Della Robbia. La scultura invetriata nel Rinascimento, 2 voll. Firenze, 1992, II, pp. 476, 485-487).

The garland presented here seems, like the aforementioned altar which is today to be found in the basilica of the Holy Sepulchre of the city in the Lazio region, to be inspired by the Florentine models, even if with some peculiarities, as the diluted application of the colour and the predominance of certain hues, as ochre, which seem to be in line with the preferences of the mysterious Beneventano and other specimens, also these from Umbria and Southern Italy, which may be dated to the years when this glorious technique was on the wane.

The work is accompanied by a scientific report from TecnArt of Turin (dated 4th September 2015) in which the company certifies that the thermoluminescence which has been effectuated is compatible with a production date between the 15th and the 16th century.