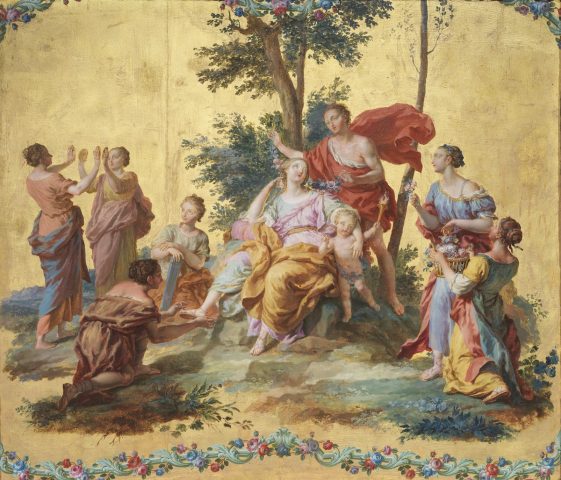 Probably representing a quite unusual iconography as the Garden of Venus, a motif remembered for instance by Baldinucci with reference to Antonio Franchi’s painting for Montecitorio, this vivid representation is an excellent example of Neapolitan decorative painting. Characterized by its outstanding execution, the work is admirable due to the graceful movements, the smooth complexions and the refined details as the flower bouquets or the frieze with vegetal motifs. As pointed out by Mina Gregori, who has attributed the composition to the Neapolitan artist, who may have been aided by one or more assistants, this painting on wood probably originally served as decoration of a cabinet, a sedan chair or a carriage, as suggested by its gilt background “a characteristic which is found in Naples in paintings of markedly decorative qualities”, as well as the garland surrounding the entire work.

Fedele Fischetti developed his work in a post-Solimenesque milieu; he was also influenced by the art of his fellow townsmen De Matteis and De Mura, and manifested a growing interest in Batoni’s classicism. These interests may be observed in older dated works, from the Sixties of the century, which are most similar to this painting, while his art was gradually to develop in the direction of a neoclassical taste, as witnessed for instance by the canvases realized for the Palacio Real of Madrid, which are closer to the novelties introduced in the city by Anton Raphael Mengs and by Kauffmann.