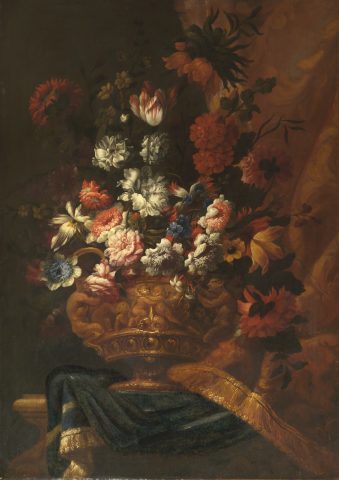 Peteer Casteels, certainly the most representative member of the dynasty of painters from Antwerp, first and foremost distinguished himself as a flower painter, even if he also dedicated himself to painting birds of every kind. Between 1712 and 1715 the artist became a member of the Guild of St. Luke in Antwerp, after which he moved to London where he mainly painted flowers, realizing works in which “wicker baskets and precious vases, filled to overflowing with flowers that spread out like a fan, seen from below up, were his most typical and frequently used motifs”.

Also this monumental composition is an example of the preferred genre of the artist. Rendered with great skill, the luxuriant flower composition, which can only just be contained in a metal vase with embossed decorations featuring satyrs, cupids and pod-shaped motifs, stands out with its colourful abundance among precious brocades. The “from below” perspective characterizing the painting is, as Sestieri observed, another characteristic trait of the Flemish painter, who used this angle to render the composition even more magnificent.