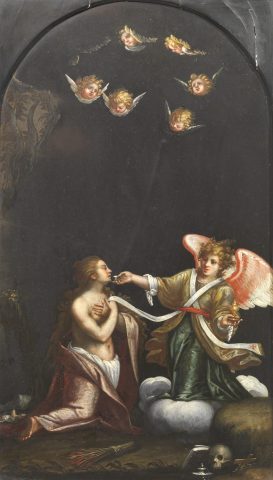 According to a tradition that was especially dear to the Veronese school – and it is significant to note that this work has previously been attributed to this school – the scene featured by this painting emerges vividly from the natural black background of the slate. The motif of this excellent work, of which refined linear elegance and palette still belong to the late Sixteenth century, is the episode in which Magdalene, repentant of her past life as a sinner, is given communion by an angel during her penitence in the desert. At the bottom left a distant city alludes to the world the saint has left behind.

The attribution suggested by us, namely to Vincenzo Spisani, a Piedmont-born pupil of Calvaert in Bologna, is based on comparisons with works as Saint Charles Borromeo at the sepulchre of Varallo, at the National Picture Gallery of Forlì (Zeri Foundation), and the Deposition of Christ in the sepulchre in the Molinari Pradelli collection, which have formerly been attributed to Tiarini and Badalocchio, but which have for some time been retraced to the original painter from Piedmont, and dated to the years between 1620 and 1630. In the case of the former of the two works the special arrangement of the drapery of the saint’s clothes, quite similar to the garments depicted in this work on slate, is illumination. In that of the latter painting we invite the observer to compare the faces of the Infant St. John and the angel who is holding the spine crown – another detail worthy of notice is the peculiar blazing development of the hair – and those of, respectively, the angel who gives Magdalene communion and the cherubs crowning the upper part of the painting presented here.