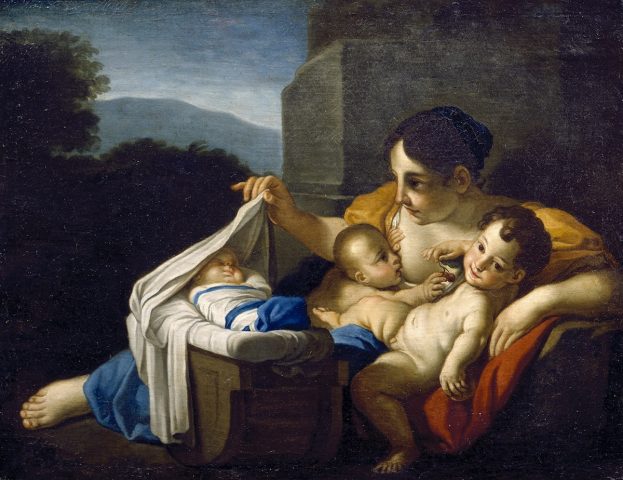 This charming canvas depicts the allegory of the Charity, one of the theological virtues along with Faith and Hope. According to the tradition, it is represented by a young girl who is taking care of three children. In his famous Iconology Ripa (1603) describes Charity as a “woman wearing a red dress” who “holds a boy in her left arm, nursing him, with another two playing by her feet”. According to this author, the three children “show that even if Charity is a single virtue, its power is nevertheless tripled”. It is a matter of a completely new interpretation of this motif, which is added to the different known versions of this composition, painted by the Emilian artist Carlo Cignani, a leading representatives of Seventeenth-century classicism. The known versions comprise the bigger one held by the Castelvecchio Museum in Verona and the one which is part of the Collection of the Cassa dei Risparmi of Forlì; it is interesting to note that in the latter work the blue cloth of the child, and the red one on which one is lying in the foreground, are inverted with respect to this painting. Buscaroli Fabbri, agreeing with Renato Roli, dates this invention by the Emilian painter “due to the formal and pictorial relations connecting this Charity to the other compositions with the same motif and the Davia Altarpiece at the Picture Gallery of Bologna” to the Eighties of the Seventeenth century.