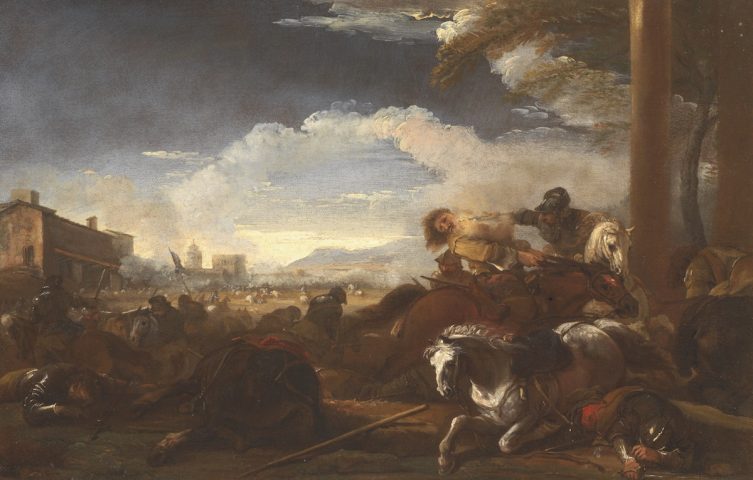 The dramatic war events of the 17th century, from the bloody Thirty Years’ War to the strenuous defence of Vienna and the West from the Turks, were the tragic source of inspiration for the creation and extraordinary diffusion, in the Seventeenth century, of the painting genre of the ‘battle’. Of all the artists specialized in this genre, Borgognone – who was born in Borgogna and  who came as a young man to Italy, where he moved several times before finally settling in Rome – was perhaps the best known and famous one, with commissions from some of the greatest Roman and Italian families. The painting shown here has been recognized as the work of this ‘battle painter’ by Giancarlo Sestieri, who has underscored the interesting iconographic derivation from a painting by Cerquozzi. This composition, with which Bergognone has measured swords on at least one other occasion, is distinguished by the columns of a classical building to the right, an unusual presence in landscapes that are normally dominated by bastions, fortresses and walled cities. Also the rural buildings on the opposite side appear in the painting by “Michelangelo of Battles”, as do the point-blank encounter and the shaken horse in the foreground. The meeting with Cerquozzi in Rome, which Baldinucci has described in detail, represented a “springboard to a rapid Roman success” for Bergognone.

Sestieri, who due to the studied dramatic atmospheres and the sombre hues of this painting underscores “the clear influence of Rosa”, dates the work to a “mature but not yet advanced phase” of Borgognone.