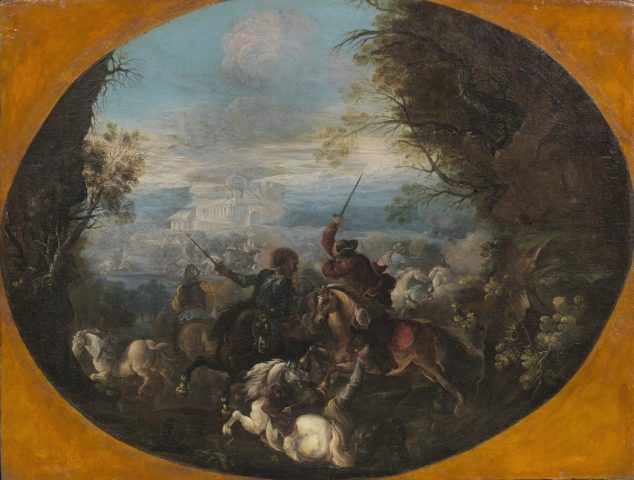 It is to Giancarlo Sestieri that we owe the reattribution of these ovals to the “skilled painter of battles, landscapes and small historical scenes” Francesco Maria Ranieri, also called Lo Schivenoglia. As pointed out by the scholar, this as yet quite unknown Emilian painter who was active in the early Eighteenth century, characterized by a rococo language of neo-mannerist origins, looked to two masters as beacons, namely Francesco Monti also called Il Brescianino, court painter of the Farnese, and the Mantuan Giuseppe Bazzani.

To the former, who was along with Antonio Calza one of the most appreciated battle painters in Northern Italy in the years straddling the Seventeenth and Eighteenth century, Schivenoglia took inspiration for the animated composition of his battles, while Bazzani was “determined to give his figures the expressive verve which is so fascinating yet slightly disorienting” and “to convey the ardour of the two battles”. In addition to these two artists, Sestieri suggests that the author of the ovals presented here may have looked to the apprentices of Brescianino, especially Spolverini, but also to specialized painters from a Venetian milieu, as Antonio Maria Marini “due to his appealing predilection for free composition, guided by spontaneous and uncorrected outlines of horses and riders, where the colour is given more importance than the drawing and the details merely sketched”.

Considering the limited number of works which have recently been published to recompose the physiognomy of this painter (G. Sestieri, I pittori di battaglie. Maestri italiani e stranieri del XVII e XVIII secolo, Roma, 1999, pages 454-455), these two paintings represent an important addition to the reduced body of works of this battle painter, who was among other things director of the new Academy of Mantua.